Over a year ago  it was decided to give Joshua the best 30th birthday present ever. So for over the course of a year Anthony has been planning, plotting and fretting. Tuesday May 24th, the Phoenix Project AKA surprise the heck out of Joshua sprang into action. For those of you who read our blog you know that back for Christmas, Joshua got a special christmas card letting him know of the upcoming “road trip”. (see post here)

All four of us woke up and had a nice breakfast at home. Anthony and Jayme packed the car with our suitcases for our “Road trip”. Joshua had been told what to pack the night before and complied well with his orders. By 8:00am the car was ready and everyone piled in.

Anthony pointed the car towards I-205 north and off to the airport we headed. Joshua had been told we had to pick up our rental car, since our current car is on it’s last legs. As we turned onto airport way Anthony gave Joshua a fake trip itinerary to keep him off his guard. It was a wonderful tale of a house rental in Longbeach Washington and a cruise to Alaska to pan for gold and visit a fish factory. Joshua began reading and only popped his head up when Anthony missed the turn off and pulled into the arrivals lane. It was at that point Joshua began verbally asking what the heck was going on. 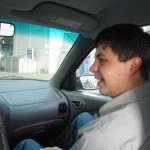 Anthony pulled the car over and clicked on his iPod, Hawaiian Roller Coaster started playing and Anthony announced that the plan might be a wee bit different then what Joshua was currently reading. Jayme and Sam then yelled surprise and Sam started taking pictures.

Jayme was the happiest person in the world at this point as he LOVES airplanes and had voiced his objection to having to take a long car ride. As soon as Anthony told Joshua and him that we would fly rather then drive he was thrilled.

We unloaded the car and did our goodbyes to Uncle Sam and then the three of us walked into the airport. We headed down to the Hawaiian Airlines check in desk and had no issues checking our bags through to our final destination – Molokai. This was the first bittersweet moment for Joshua, having just lost his Hawaiian Grandmother. Molokai was her home island. This would not be the last bitter sweet moment, her recent death haunted our trip.

Unlike our plane trip to Salt Lake city we had plenty of time to kill before our plane started to load. So we loaded up on lots of snacks, water and juices. We also had time to let Jayme run around in an empty gate and burn off some of his abundant energy.

Originally Anthony had booked our seats on row 30 (for Joshua’s 30th) which gave us a window. When Jayme came along we had to give up the window and move to the back of the plane and three center seats. Just for reference, Hawaiian airlines flies 767-300R wide bodies out of Portland. The cabin was clean and open. No seat back video and limited overhead entertainment. You can rent a $15.00 TV device, but we had two iPads, two iPods, one iPhone and one gameboy all stocked with movies, books and games. This also marked start of Jayme’s addiction to angry birds. The flight itself was about 5 1/2 hours and not a bad flight. Jayme did really well and didn’t have any issues, and in fact got a little bored.. He did like the in-flight restrooms however.

We landed in Honolulu a little bit after 1:00pm local time. As we exited the plane, we walked out of the gate area and we were met by a gentleman in a blue hawaiian shirt holding a sign that had each of our names written on it. He had a lei for each of us. Super embarrassing moment for Joshua, totally cool moment for Jayme.

After taking a bunch of photos with our new leis, we tried to figure out where to go next. We had a Island Air flight to Molokai that was flying out of the inter-island terminal. We ended up taking the wiki wiki (hawaiian for quick quick) bus to another terminal. This terminal was hot and crowded so we all took turns running to the restroom to strip off socks and undershirts and throw on shorts. We then had a quick lunch of airport pizza hut pizza (and a mixed drink for Joshua). We then walked down to the inter-island terminal which became our new home for 4 hours.

As we arrived in the inter-island terminal an early flight to Molokai was loading. The gate agent told us that we could take this one or wait the 45 mins for our scheduled flight. But, if we took this flight we would not get our luggage until later. We foolishly decided to wait, but would have done it differently had we known that the next two flights to Molokai were going to be canceled…

Our flight did not start boarding until a little after 6pm. Jayme had a really hard time dealing with this, he ended up having to lay down with his head on one of our jackets and had to work very hard to keep his body from being silly.

The flight to Molokai was a short 25 mins, we spent more time taxiing then flying. Once at the grand Molokai one gate “airport”, our luggage arrived quickly and we walked across the huge airport one lane official parking area to the Alamo car rental building. Joshua requested we upgrade to a bigger car, he had just rented a economy car for his Grandmother funeral and he did not enjoy it. So we got a Dodge Nitro and added the pre-fuel refill at $4.75 a gallon since the main gas station on the island was currently $5.75 a gallon. 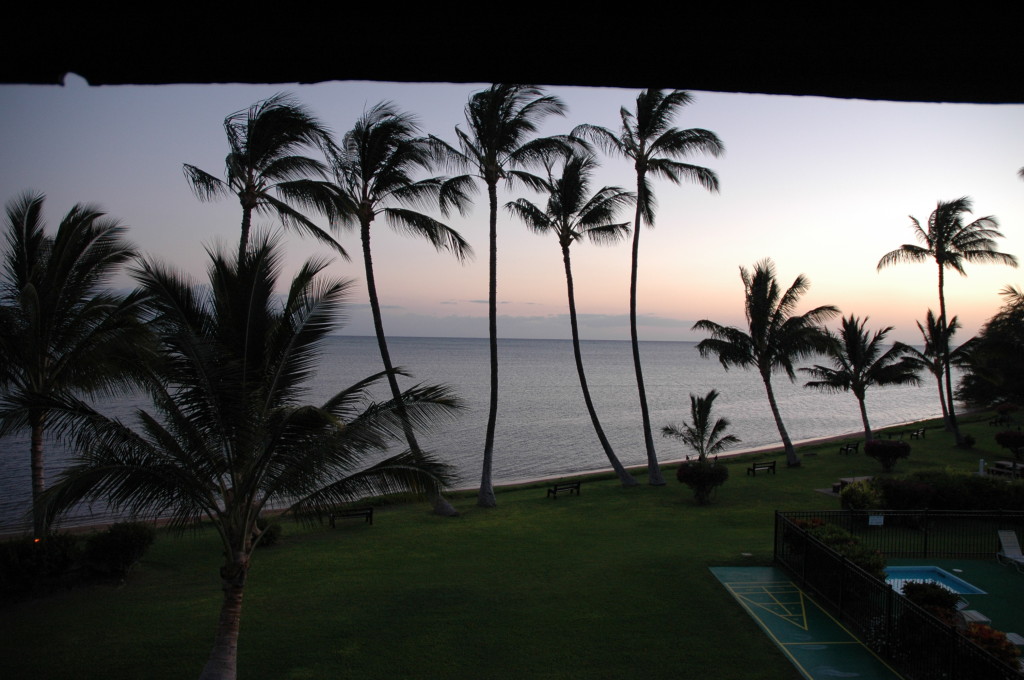 We then drove to our new home for 3 nights, the Molokai Shores condominiums. We got in late, and everyone was tired and hungry. So once we had inspected our condo and dropped off our bags we headed back into town to look for some groceries and some dinner.

We stopped in one of the local grocery stores and got bread, some oranges, yogurt, honey butter and a big jug of POG. And then did the drive through at Molokai Burgers.

Back at the condo, we spread out our Molokai Burgers on our lanai table and had a nice dinner over looking the condo grounds and the ocean. Dinner turned out to be fantastic, Anthony is not a burger fan yet even he liked it. Yummy fries and everything was good and fresh. With food in our tummys, everyone started to get tired.

A quick inspection of the bedrooms discovered that the 2nd floor bedroom, up the spiral staircase had the smaller bed, so that became Jayme’s bedroom. But knowing his silly body in the mornings we put him to bed and moved a large chair to block his ability to come down the stairs without help.

Sleep came very easily after our long day and yet, morning and our new chicken friends came very quickly.