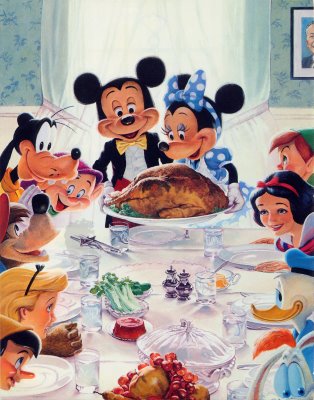 With the Thanksgiving season upon us we began our annual trek to Arizona. But this time we took a slight detour.

Jayme was SO pumped to go to Grandma’s house. Weeks before the trip he packed his bags will all the toys he wanted to take with him. Everyday we would ask “how many more days?” So when the big day came he was super ready to go. Funny to think that when he first moved in everyone was worried about him on airplanes, now he is a seasoned world traveler!

While planning the trip we found the flights into Phoenix were through the roof. Anthony quickly started looking for ways to make the trip cheaper. He found a flight into LAX and a one way car rental that turned out to be cheaper then flying directly into PHX by several hundred bucks!

So Monday evening of Thanksgiving week we flew out to LAX, collected our rental car a HUGE Ford Crown Victoria (think giant old persons car) and then drove over to our hotel. We told jayme that we would be spending the night and then driving onto Grandmothers house. The truth…. well we would be going to Disneyland.

Once we go to the hotel (which we drove to via the back way to avoid any big DISNEY signs) we quickly got Jayme to our room. The next morning we ate in the room, to avoid any families heading out to the parks. We then told Jayme that we should go for a walk before we headed to Grandmom’s, since it would be a long car ride. So we started walking down harbor blvd.

As we walked Joshua played a game with Jayme, to see who could avoid stepping on the most cracks. this worked great, it wasn’t until we turned and stepped on to Disney property that Jayme noticed something was not right. His first clue was a huge Monorail that zoomed by. He got very quiet and looked a bit perplexed and said in a timid voice “I think this is Disneyland.” We then told him that he was right and we would be spending the whole day at the park. He remained very quiet and didn’t get very excited.

We took him in and got fast passes for Star tours, road the Jungle boat ride, and even did the Haunted mansion. Still he was very calm and quiet. Then came Splash Mountain (the ride Anthony will not get on). As Joshua and Jayme exited the ride all wet, there was a smile that ran from ear to ear. For the rest of the day he was super excited and all smiles. Jayme had finally arrived at Disneyland!

That evening in the park we had one last surprise for jayme, we splurged for the dessert party Fantasmic package. The package comes with reserved seats and a HUGE box of cakes and munchies. We ended up with front row seats and it even gave Jayme enough room to be able to stand up and dance to the music during the show. That proved to be worth the cost in itself.

The next day we loaded up our land yacht and headed out for Arizona. The drive itself took us a little over 6 hours. We stopped along the way for breakfast and munched on the leftovers from our 3 huge fantasmic dessert trays.

We had a wonderful time at Grandmas for Thanksgiving, apart from Anthony getting sick. Grandpa made BBQ ribs and Jayme was in heaven. It was a full house full of relatives and returning exchange students.

The flight home was quick and easy but getting from the airport to home was a bit harder. Sam, who had dropped us off in our old car got into a car accident after dropping us all off. So Joshua found us a shuttle which drove us out to Gresham and then home to Happy Valley.