Growing up, one of the TV shows I was allowed to watch was Little House on the Prairie.  It was one of those quasi-christian values OK shows that was approved of by my Grandmother. Today, I think I had some sort of Little House flashback moment. And No, it was not about teen dreamy Albert.

No this flashback happened shortly after a conference call with the Foster Mother of a kido we are seeing if we match with. The flashback was of when the Nancy Olsen character was added to the show.

For those of you not up on your Little House lore, it was season 8, Little Laura and Nellie were all grown up and friends. A new villain needed to be added to the cast line up. Going with what the producers knew they created a new Nellie type character. 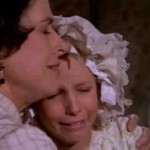 The plot; Harriet Oleson(the mean rich lady) was having a very hard time coming to terms with the loss of Nellie who was now all grown up and married to a nice Jewish boy who was in the restaurant business. So Harriet begins a search for the new Nellie, a child to fill the mean and spoiled hole in her family. She sets out to the local Minimum-Security Orphanarium and finds Nancy.

Now unlike other orphans portrayed on little house, who all had no issues (Not counting Albert or all those blind kids) and were all just perfect little kidos waiting for  nice white christian people to adopt them. But Nancy was anything but, looking back with an adoptive parent eye, it is clear Nancy was suffering a whole range of attachment issues, trama and neglect and had developed a whole range of negative skills to survive. This made her a very nasty little TV child. The show of COURSE blamed her for that behavior and then goes to show that all she needs is love and she just has to make the choice to be good and everything will be perfect. HA!

But back to the 80’s subplot, I remember clearly a point when Harriet Oleson finds Nancy, which happened after Nancy had displayed some rather horrible TV child behaviors. There is this sort of eureka moment when Harriet finds her new Nellie. Harriet had found her daughter, one who fits their families skill set.  It was a tender 80’s family values moment.

Today, we had our first phone interview with the foster mother of a kido we submitted on. The more she described this kido the more I thought of our  Jayme. I thought about all the struggles we had with Jayme when he first moved in. The similarities between the two; behavior wise, between this new kido and Jayme is pretty amazing. So much so just putting it in this blog is revealing too much about the child. The weird part was both Joshua and I kept saying… this is so Jayme 3 years ago.

Now unlike Harriet Oleson, either of us hold  warm feelings for all of the tantrums, explosions and struggling we went though with Jayme. From the moment we started the adoption process again our intent has been to get a child with lesser needs then Jayme had. But it was very hard to hear about this little guy’s struggles and know in my heart we can help him, we know this road, we know how to reach him.

There were of course some major differences in some ways there are some bigger concerns with this kido since he comes paired with a sibling group. We also have to think about how adding any child with higher needs into our home will effect Jayme’s amazing progress. So it a lot to think about.

It’s very early days and we are in the discovery phase now. But for a few moments today I felt like a bit like Harriet finding her Nancy. Now all I am missing  is a nice Jewish boy for Jayme to marry.