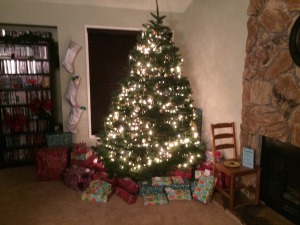 This year we made a pact to NOT spoil our kids. For the past few Christmas we have poured tons of presents on Jayme, even surpise trips to Disney World. Well this year we decided that there was no way we could keep that up. Yeah, spoiler alert we failed. Never let it be said we are not spoilers of children.

We started the Xmas season with at the annual Christmas Tree hunt. This year our friend was dressing up as Santa handing out stockings filled with presents. Jayme was well weird with Santa, Gabe screamed his head off (photos on shutterfly) and Elijah well he came with a plan. The week before he had written a letter to Santa and  as as we loaded up in the car to go to the tree hunt Anthony reminded him to bring it. So Elijah got to read his letter to Santa in person. It was a very charming moment.

Then after some pancakes and hot coco we headed out to find our tree to chop down. Honestly, we just wanted a simple tree. We found it and it looked fine in the tree farm. But our first warning sign should have been the fact it was so large it could not be put in the tree bailer. It clocked in at 8 feet 3 inches tall. Well of course we NOW needed new lights and bulbs…. $$$

See Christmas this year was like a slow trap, like being a frog in a pot of water, slowing the water temp rises and you never notice that it’s boiling around you. But for us it was not water it was money, each trip Anthony made to the store at least a hundred bucks was spent.

The next big holiday event was Jayme’s 4th grade Gingerbread home building day. On the last day of school, before Christmas break, Jayme’s class was planning to make Gingerbread houses and his teacher asked for all of the parents to help out and donate candy for their children to decorate the houses with. So we loaded up the van and headed over to the Lovely Suzanne memorial shopping experience AKA the Dollar Tree. There was no real budget we just grabbed anything that looked like it would be fun and colorful. It is amazing how heavy $50 bucks of candy can be. In fact we got so much that we had to give Jayme cardboard box to carry it all in as the bags were to heavy to carry and were ripping.

Apparently Jayme was quite the stud with his candy haul, very few parents had sent items in so Jayme’s candy saved the day. We got a huge thank you E-Mail from his teacher and an invite to come and help…. so Anthony did. Yes… Anthony was the sugar plum fairly handing out candy to all the good boys and girls (yes add your pun here). But Jayme was so happy that his Dad came to school and was there.

Christmas eve we decorated Christmas cookies for Santa and then all watched the Charlie Brown Christmas Special. A quick check in on Joshua’s iPad and the NORAD Santa tracker  showing Santa on his way was good motivation for the kids. Anthony read the night before christmas as a bedtime story and then tucked them all in, Jayme stayed in his room all night, but didn’t fall asleep for hours. Gabe passed right out. Elijah, dear Elijah spent most of the night planing a prison escape. Warren Joshua had to stand guard on him most of the night while Anthony moved the presents down to their 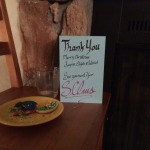 mongol horde and once all of Santa’s Elves had disappeared the boys ran down the stairs and with smiles found the tree surrounded by presents. They also found a nice note from Santa thanking them for the homemade cookies and milk.

Jayme has really had a hard time over the last few months, going from being an only child to one that has to share has been a big learning curve for him. As the boys looked for their names on all the presents Jayme found only 2 with his name on it. This set him off in a bit of a pout. Of course the dad’s knew that he got everything he wanted but for the next hour Jayme was sure HIS Christmas was ruined.

Anthony cooked up a big breakfast and after the last nibble was eaten and the begs to open presents could not be withstood any longer, we gathered around the tree.

Gifts, we had planed on just a few each. We think we know how we got off track. Anthony was buying presents and hiding them in the closet, Joshua was buying gifts and hiding them at work and we both had even more presents arriving via Amazon the week of Christmas. So it was not until Christmas morning we noticed that each boys pile was… well lets just say VERY generous. 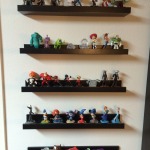 Everyone got what they wanted and then some. Elijah was drowning in Thomas the Train, Gabriel got his own toy iPhone and other loud learning items, Jayme got tons of Pokemon and all of the remaining Diary of a Wimpy Kid books he has not read. Santa also brought some shared gifts…. Disney Infinity 2.0 which the boys have to share. But the big gifts were all surprises. For Jayme it was a guitar, not from Santa or his Dad’s but from Elijah. Elijah saw it and knew Jayme wanted it and begged Joshua to get it for Jayme. For Elijah his top present was his singing light up frozen dress (video on shutterfly)

The rest of the day was spent in toyland and eating tons of food. Anthony was a little insane when it came to the food this year. Seems with no day job there is nothing to withhold the cooking madness within him. Christmas cookies, Fudge, Divinity, Almond Roca, Fruit Cake and for the first time ever sugared plums. Christmas dinner was also a bit of an overreach. Turkey, Duck, Ham, Green bean casserole, Stuffing, Pan Roasted Veggies, Sweet Potatoes, Mashed Potatoes and Sweet rolls. He even over did Christmas breakfast. Hash brown casserole, bacon, cinnamon rolls and a yummy Frittata.

In the end we spent a lot but it was worth it. They boys had a nice first Christmas together and that was what was important.