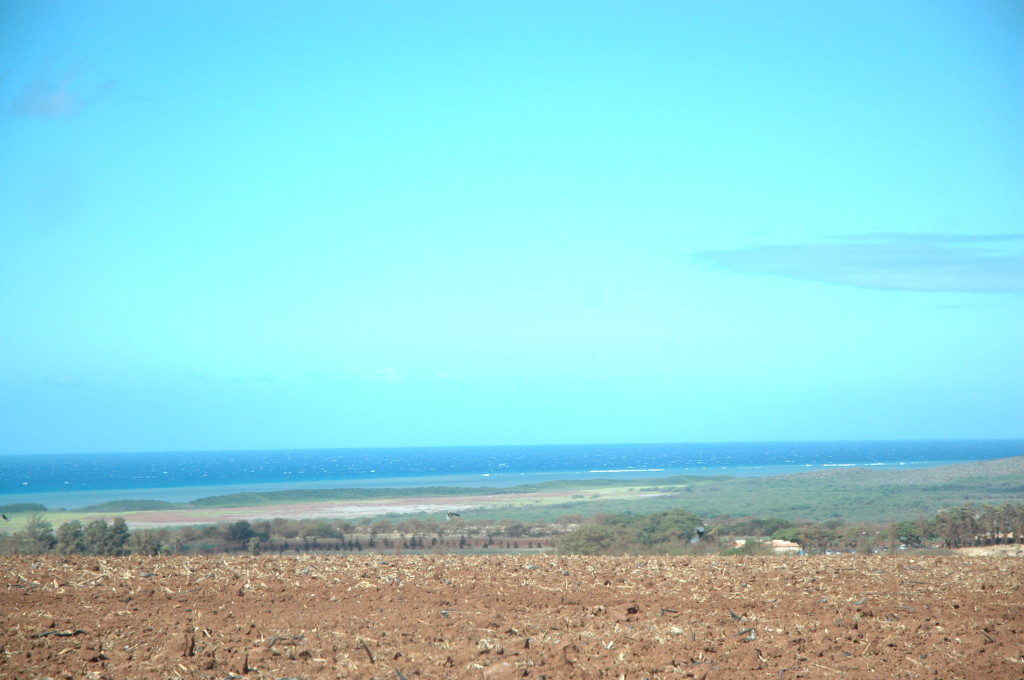 We woke up early with our 4am Rooster and various bird wake up call and had another yummy breakfast on our lanai. Josh and Jayme took a early morning walk on the beach and tormented all the ghost crabs.

After breakfast, we headed into town and got some drinks from the Friendly store again and picked up some fresh donuts and pastries from the local bakery. We planned to be out all day, today was our off road adventure.

When Joshua was last on Molokai, he was taken to a special beach and a cave with some petroglyphs. So we found the location on google maps via Anthony’s iPad and headed off. The first road we came to turned off to a long red dirt road. Being VERY brave we turned our Nitro and headed up and down the red dirt roads. After about 15 mins, we pulled off and started to get a bit worried that we where on the wrong road. We seemed to be going along the edges of farm lots and didn’t seem to be getting any closer to the beach, which we could see down the mountain. Some further inspection on the iPad reveled us firmly centered in no man’s land. So we cut back and hunted for the main highway again.

After some further google maps research and another dead end road, we found the correct dirt road to the beach. We drove for about 20 mins before we came to a big steel gate… locked. We utterly failed to find the beach or the caves. So we gave up and headed to the apparent safety of Highway 450.

We drove down Highway 450 east, it only took a few turns of the road before the wet side greenery of the island exploded on the mountains and roadside. About 30 mins down the road, the first sign that the road is narrowing appears in the form of a one lane bridge, a few minutes later the road itself becomes a single lane, and shortly after that the roadside looks more like the Indianian Jones ride themed queue line rather than a road that is suppose to accommodate 2 lanes of traffic. But the trip was completely worth it.

The views were unbeliveable, at one point the tiny road drove down to about 3 feet above sea level, right by the crashing blue and white waves and then we climbed to top of the high sea walls and saw amazing views of Maui and Lanai.

At the end of Highway 450 we ended up at Halawa beach park and Halawa bay. It was here that Jayme was baptized in the Hawaiian waters. Jayme has NO fear of water or the ocean, so we had to work pretty hard to keep him from diving head first into the water alone. We told Jayme as we drove that we were going to a special beach just for him and it truly was, again all alone apart from a few locals who lived on the bay. 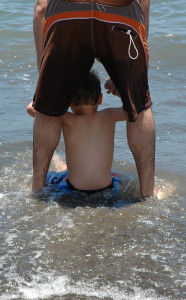 As we headed back we stopped by 2 of the catholic churches, searching for the church that Grandma and Grandpa got married in. Sadly we didn’t find it because it had burned to the ground just a few years ago.

We stopped for lunch on the way back and had another local lunch. Teri beef, Mac salad, rice and lots of spam. (What is it with Spam and Sorensens?)

After a nap at the condo, Joshua called some of his relatives on the island and within 10 mins we were getting a escorted tour of the Kaunakakai cemetary. This was another bitter sweet moment. Joshua’s Grandmother’s remains were set to arrive a few days after our visit. One of Joshua’s great aunts showed us Joshua’s Great Grandfathers and Great Great Grandfathers grave sites as well as his Grandmothers future grave site. This was an emotionally hard moment for Joshua.

After the visit to the cemetery Jayme got his way and we headed out for a pizza dinner. Molokai Pizza…. ok Hawaiian’s might be able to pull off amazing burgers but pizza… wow. Horrible service, everything was over priced.

The restaurant is right next to the dock were the fishermen come in each morning. So when we saw the fresh fish of the day special we were a bit shocked to get fresh FROZEN fish. It was so bad that after waiting for 20 mins to pay our check we walked up to the counter and paid the take out window and left no tip.

Once we got home we put Jayme to bed and opened a bottle of rum. Coconut rum with POG, our new official family drink (while on Molokai).