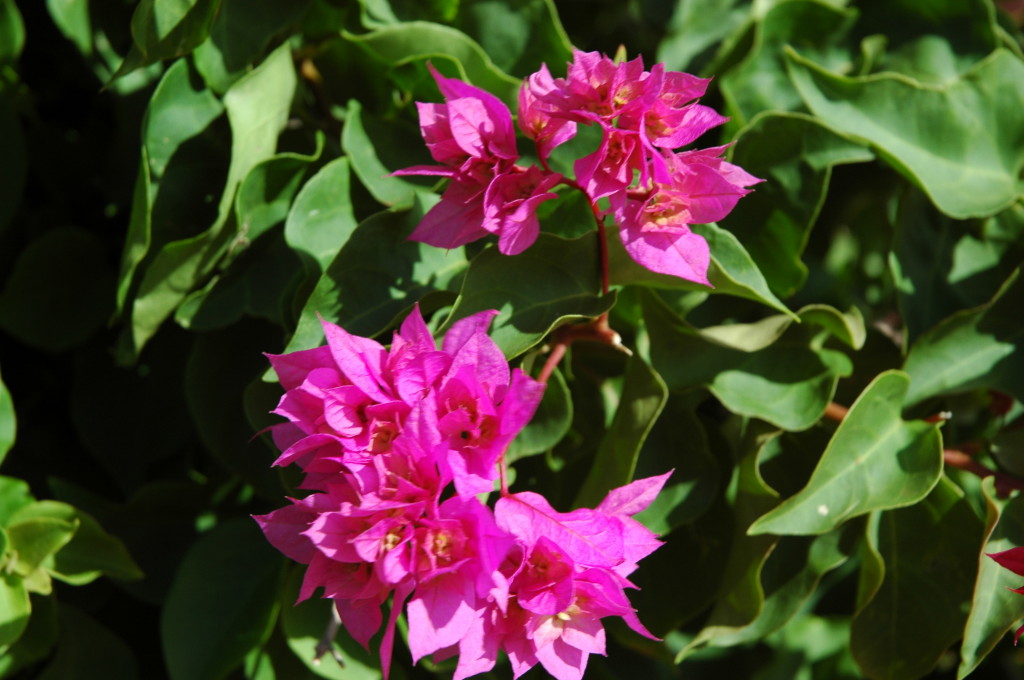 For our last morning on Molokai, Anthony and Jayme got up early (Again with the birds) and watched the sunrise from the Lanai. Anthony then served us everything in the fridge that we had left over. We had hot dogs, fresh oranges, toast, Strawberry Guava Jam and POG.

After a final walk on the beach we spent the 20 mins cleaning the house and packing up all of our stuff. We had intended to run a few loads of laundry the night before, but the laundry room was closed by the time we got back from dinner. It was simply amazing how many dirty clothes we had after only 4 days. We designated Joshua’s bag as the dirty laundry bag and spent some time balancing the bag weights.

Once we all said goodbye to our condo we headed off to the airport but along the way we did 2 stops. The first was to the cemetery again to leave our lai’s on several of the family grave sites. The rest of the family would be arriving within the week with Grandma’s remains, so we wanted to leave something for her from us.

We then drove to the POST A NUT post office. We arrived before the post office opened, so we played around outside of the post office, took photo’s and played chase. Once the post office was open we decorated two unhusked coconuts. One we mailed off to our friend John, who had loaned us his uber camera for the trip, and the other one for Jayme’s classroom. We also took the opportunity to mail back some of our new treasures and souvenirs.

Once back the airport we drove over to the car rental return area. After waiting for long time we got some to come out and help us check our car back in. While doing the return, the check in lady told us she saw an scratch on the car that wasn’t there before (but it was). At this time… Anthony kinda freaked out, this was not a happy moment for him. We had to give them our insurance paperwork and fill out a form. It wasn’t until later while reviewing our photos we noticed that on day one of our trip you can see the scratch in the car. We have yet to hear anything from the car rental company, so perhaps they have figured that out too. But that didn’t stop Anthony from adding the scratch damage plan to each of our following car rentals on each island.

So we checked into our flight… did we mention how SMALL the airport is? One check in desk, one bag scanner for the whole airport and only one gate. Thanks to all of the freak out at the car rental window we only had a few minutes to wait for our flight, yet strangely were were still first to the gate. Right before they opened the gate a whole plane load of people arrived at our small gate and lined up in front of us. So we ended up being last on the plane, yet first to the gate.

Our flight to Honolulu was via Lania City. So we had the chance to see another Hawaiian island. Joshua was able to get a window seat after the plane emptied and got some really great photos of the airport and the island. Jayme was super brave on this trip and used the tiny bathroom onboard without any issues! Both legs of the flight were very short and before we knew it we were landing in Honolulu.

Again our plane landed in the inter-island termaial, we headed to the baggage claim area. They were nice enough to turn the baggage carrousel on for our 3 bags. The carrousel ran for all of 30 seconds, did we mention the smallest factor of this gate? For this leg of our trip we relied on shuttle service rather then car rental. Anthony had booked us with hawaii23 shuttle, which is a private shuttle company. We called the company and the owner who was picking us up apologized as he was running late and offered to let us join other group of people he was picking up and the fare would be no charge. He told us to head to the median and look for a lady named Allison. It was pretty easy to find the other group and alot of fun to walk up and ask if she was Allison (very funny reaction). Mark, the owner, picked us all up a few minutes later and gave us mini tour of Honolulu as he drove us to our hotel, the Hilton Hawaiian Village Rainbow tower. 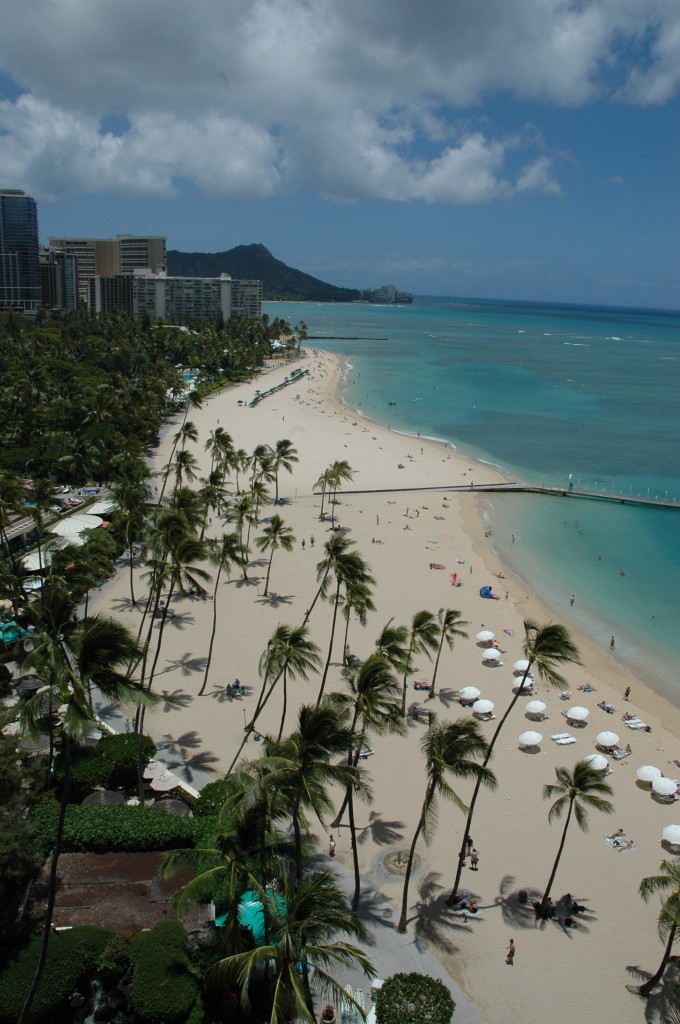 The shuttle drop off point is a fair walk from our hotel as the Hilton Hawaiian Village is a HUGE resort of 6 different towers. It was like a big downtown Disney shopping area. We got to the check in desk and our room was ready! Oceanfront view with a direct view of Diamond Head and Waikiki Beach…. BREATH TAKING!

We got to the room and dumped our stuff. The first thing we headed for was the AC. We really liked our condo on Molokai, but we really needed some AC now. Anthony hit the switch and nothing happened. Everyone was hungry and after being on a plane and a shuttle, we wanted to move. So we decided to worry about the AC later and headed down into the village and wandered around the little shops.

One store we found was the Honolulu cookie company. They sell shortbread, Joshua’s favorite. We then found a row of resturants. Pizza,  Asian noodles and a New York deli that served all day breakfast. The choice was easy for us, we love New York deli food and could eat breakfast for all three meals.

We walked up to to the hostess and told her there were three of us, she told us all she had was indoor seats. That was fine for us so she took us in and then in deeper in to the furtherst table in the back in the BAR area. This was a strange place to put a family with a small child, but we were hungry so we didn’t think to much of it. Menu’s looked great and right away both of us started drooling over the sliced corn beef pictures… We love good corn beef and in a New York deli restaurant this should be pretty good. Jayme ordered pancakes with a tall glass of milk and we decided to split the corn beef eggs Benedict.

After waiting for a pretty long time our waiter came and took our order. Then a long time later our drinks came out. Jayme being Jayme took his drink and started to inhale his beverage. Half way through his first GULP his face turns green and he spits his milk back in to glass and sets it down. His only words are “This milk tastes bad.” The milk had turned, not just turned but was clumpy. We quickly waved over the hostess and complained. The only thing she said was “Oh…. was that regular or skim?” not I am so sorry your child just drank curdled milk or any other type of apology. Anthony asked for orange juice as a replacement and Jayme was happy. She left and just as we expected the manager to come over to our table in outer mongolian to apologize, our food arrived. Jayme had a 2 big pancakes and was in heaven, Our food….. well… dry rubbery poached eggs (how you make dry poached eggs I will never know) on top of CANNED dog food AKA canned corn beef hash slurry on two burnt english muffins, toped with hollandaise sauce with a nice thick skin formed on top. This all became too much for us, between the scratch on the car, spoiled milk being served to our son and now rubbery congealed burnt CANNED DOG FOOD. After Jayme finished his pancakes we paid for Jayme’s food and stormed out. No manager in sight, no one to complain to in sight. This restaurant has no excuse for serving poor food, they are on property of a good hotel chain, where the cost of the rooms per night is not cheap. They should be closed down. Thank heavens for ABC stores as they saved us. After our horrible lunch we popped in and got some cold sandwiches and sodas and retreated to our balcony in our hotel room.

After lunch part two, a very responsive maintenance team and the welcome blast of A/C. We all got into our swimsuits and headed down to the beach. We walked along the sand until we reached the Outrigger Hotel and their concrete dock. At that point we turned around and walked back in the water. It only took 2.3 seconds for Jayme to be soaked from head to toe, he just layed down in the water and started splashing water on his body. Jayme then started dragging Joshua in deeper and deeper. Joshua finally gave in and towed Jayme about 10 feet out to sea and started to toss him around. Jayme was shrieking with delight and loving every minute of it. Anthony headed over and checked out some hotel towels and got to sit and watch the maddness.

After we cleaned up from the beach we walked over to one of the several pools. The one we found had two water tubes and was themed to be cave grotto. Jayme swam for a LONG time.

We headed back to the room and changed for dinner. We walked up Wakiki beach looking for dinner. After a long walk we found the California Pizza Kitchen, Jayme’s favorite. The cool thing was it was our waitress last day as she had just been hired at Disney’s Aulani resort. Also just as we sat down for dinner the police officer’s memorial torch rely started. Ton’s of police cars lights and sirens and then over a thousand people marching poured by our balcony table.

By the time we walked back to our room it was a little after 9pm and we had one tired little boy. He was out as soon as his head hit the pillow and so were we.