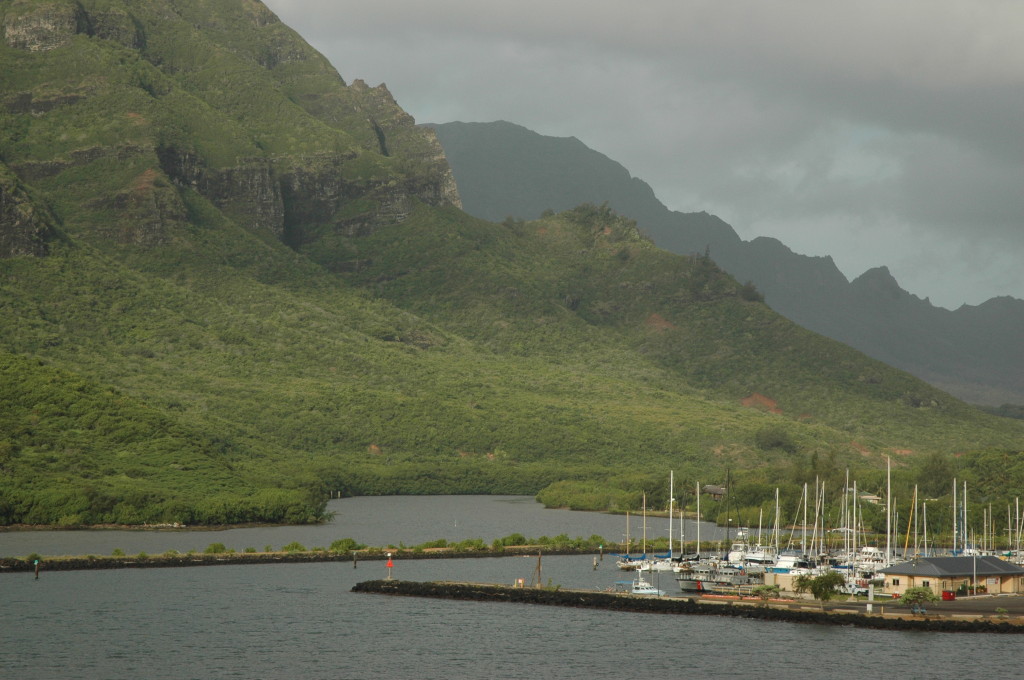 We woke as the ship slowly pulled into the Nawiliwili port on our last island Kauai. Kauai is called the garden island, and it is very clear why. Everything is so green. With no rush we we had breakfast topside at the on desk buffet. We then exited the ship and jumped on our last Thrifty shuttle. The airport was a bit further aways, but no issues this time with our rental. We very quickly where jumping into our third Dodge Caliber rental and heading down the road towards a pretty amazing day for Jayme.

First stop was at the Kauai Plantation. We drove in and both Joshua and Anthony played distract the Jayme, we wanted this to be a big surprise (turns out we got the bigger one). So as we drove into the plantaion we told Jayme to look right or left, anything for him not to see the railroad tracks or the train. 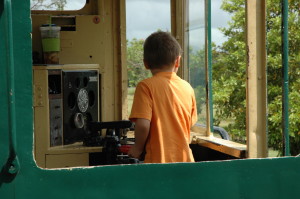 The plan was to explore the grounds a bit and take the 10:30 am train, well Anthony blew it. The train departed at 10:00am not 10:30am, so we had to run to get our tickets and by the time we got there all of the good seats in the 2nd open train car were taken. All that was left was seats in the hot enclosed train car. So we decided to make the best of it and sit as close as we could to the train engine, because Jayme is train insane. So boarded and walked all the way up and took the first row seats so Jayme could watch the train driver.

A few moments before the train ride began the tour guide,whose seat was next to ours, boarded the train and looked at Jayme and asked him how old he was. The then asked Jayme if he would like to drive the train today. No need to comment on what Jayme’s response was. Once he had our ok, our son was whisked off the train car and onto the train engine. For 45 mins Jayme rode up front with the train engineer. At one point, the engineer (Bruce) stepped outside of the cab and leaned in the window and put Jayme in the drivers seat and taught him how to run the train. He then took Jayme’s seat and let Jayme drive the train alone.  This was the singular highlight for Jayme for the WHOLE TRIP. Of course the best part for Anthony was Joshua asking him in amazement “How did you arrange this?”

Once the train trip was over and the “Can I drive the train again?” mantra was taken care of, we explored the Plantation. Stopping by the Rum house and buying a few bottles.

Our next destination was Waimea canyon, the Grand canyon of Hawaii. But along the way we had to visit a friend of our, experiment 626. When the Disney artists came to Kauai to do their research they spent a lot of time in Hanapepe. Much of the town an the roads  and hills around Hanapepe ended up being truthfully redrawn into te home town of Lilo and Stitch in the movie Lilo and Stitch. It was pretty cool to see the town and so inspired the artists, in fact while driving we swear we say the road to Nani and Lilo’s house.

Once had our fill of Disney Magic, we headed out for the canyon.

Waimea Canyon: also known as the Grand Canyon of the Pacific, is a large canyon, approximately ten miles (16 km) long and up to 3,000 feet (900 m) deep, located on the western side of Kauaʻi in the Hawaiian Islands. Waimea is Hawaiian for “reddish water,” a reference to the erosion of the canyon’s red soil. The canyon was formed by a deep incision of the Waimea River arising from the extreme rainfall on the island’s central peak,Mount Waiʻaleʻale, among the wettest places on earth. (source wikipedia)

Simply put, it was amazing. We drove along the canyons edge, stopping for pictures and eventually ended up in Kokee state park. There was a nice little resturant that served us a great lunch and a huge green lawn for Jayme to run around and explore. Jayme also had the chance to feed a large flock of wild chicken’s.

We took our time driving back and even stopped at a local coffee plantation. There was a nice little self guided tour on the plantation and it was another chance for Joshua to buy more coffee. We drove back to the airport and dropped off our last rental car with no issues. We had planned to mail a big box of stuff back home, but could not find an open airport. This worried us a bit as we had at least 40 pounds of Rum, T-shirts, sea shells, ect. In the end we decided the overwieght costs for Hawaian airline would be cheaper then trying to Fed EX our stuff.

One back on the ship, we found out that NCL didn’t want us to bring 2 bottles of run on board…. But once we got them checked there was no issue. We headed back to our room for a rest and Jayme headed off to kids club. We loved Kid’s club, perhaps a bit more then Jayme did. For it let the Dad’s to have a nice dinner for 2 alone!