Just like Hilo, Kailua Kona was a one day stop. But unlike Hilo, the ship did not dock, the ship dropped anchor out in the bay and we had to take tender boats to the dock. 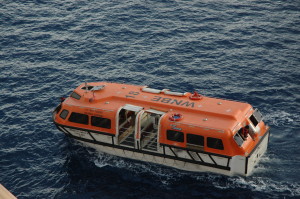 This was pretty fun for Jayme, the tender boats are much more like a real boat and had a lot more bounce then a slow moving cruise ship. It was a much different way for him to ride on the ocean.

Once we made it across and on to dry land we whipped out the iPad and started walking to Starbucks. Joshua needed some coffee and wanted to use the free wi-fi to check in with his email. We didn’t know it at the time but while relaxing in Starbucks we were observed by one of the crew from the ship. Later, he introduced himself while working in the Aloha cafe, he thought Jayme was cute and he was “family”.

After our caffeine fix, we walked over to a local grocery store and hit the coffee aisle. We picked up a little over 3 pounds of Kona coffee at the local rate rather then the tourist rate. Of course we did have to pack mule it with us for the day.

Coffee needs met we walked back down to the waterfront and visited the Hulihee Palace, former former vacation home of Hawaiian royalty. It was mostly a tourist trap, but not a bad one.

We then spent the rest of the day wandering and shopping in all the beachside stores. One place we found was Donkey Balls, a store that sells chocolate covered macadamia nuts. Once in the store Jayme made a little friend, the Grandson of the owner. While we shopped and Joshua ordered a tall Kona coffee, Jayme helped the Grandson front face the store. It was UBER cute. He really was trying this whole trip to connect and make friends.

It was here in Kailua Kona that Jayme had his first shaved ice. We ordered a rainbow and all shared it. A shaved ice is like a snow cone, but the ice is finer and more like slivers then ground ice, it is also MUCH MUCH bigger.

On the way back to the ship, Jayme announced that he had to go pee. Which goes like this… “I NEED TO GO PEE… AHHHHH AHHHH AHHHH AHHH” Followed by jumping and dancing. We quickly looked around for the nearest restroom and ran in to a little restaurant. A server walked up as Jayme is doing his dance and holding himself, and Anthony asked if Jayme could use their restroom. She looked at Anthony, then at Jayme and then said… “No.” Without missing a beat Anthony/Nyssa asked her back, “Oh, so it’s ok if he just pee’s on the floor here, Great! Do you have a mop handy?” She just stood there shocked that someone called her on her ignorant actions. Luckily, the restaurant right next door had a great staff and had no issue with helping a 6 year boy out of pee hell.

The boat ride back to the ship was uneventful, but the evenings activities where! Tonight the Captain was going to visit the Kids Club tonight and it was the number one thing Jayme wanted to do. We were a bit nervous about sending him. Kids Club is a no parent zone, but has a large staff to watch the kids. We really didn’t know how Jayme would behave. So we dropped him off and told the staff were to find us. After a nice dinner alone (our first since Jayme moved in) we returned to the kids club only to see Jayme the perfect angel. His face aglowing and you could see how much he wanted to stay with the other kids. So we came back 30 mins later.