Jayme’s T-ball season came to end one week after school broke for the summer in a big potluck at Oaks Park.

Coach sent out a online sign-up form for each family to bring something to the potluck. Anthony was on top of it and of course over cooked. He made his spinach pasta salad, hawaiian style mac salad, a fresh lemon carrot salad, cajian cornbread and his Grandmothers raspberry marshmallow desert.

It took all three of us to carry all of the food to the car… this should have been our first sign that Anthony overcooked. We drove down to the amusement park in perfect wether. It was a wonderful day; sunny, warm and not a cloud in the sky. It was also the opening day for the summer season at the park, so the parking lot was full. We parked on the other side of the park, down by the roller skating rink (more on that later) and walked the whole park to find our picnic area.

We were one of the first to arrive and quickly helped layout all the food. On top of the food we brought there was this amazing bacon potato salad (which we have since recreated at home), lots of chips, hot dogs and brats.

While everyone assembled  coach handed out the ride bracelets and we slipped away to ride a few rides before lunch. The first ride was the ROCK-O-PLANE, it’s a blue wire cage that your locked into on a small ferris wheel. Since you travel upside down, professional coward Anthony stood and held the bags as our two brave hero’s Jayme and Josh locked themselves into their cage of doom. The first few times around Josh would hit the lock bar and the two of them would do a full upside down loop. It was about 2 mins’s into the ride that Anthony first noticed something wrong… No one was getting off. The wheel kept going and going and going and going. The operator started waving and trying to get his supervisors attention as he could not get the wheel to fully stop, slow yes, stop no. Our poor hero’s were stuck on the ride, going around and around for about 15 mins before a mechanic was able to come over and manually stop the ride so each rider could exit.

Freed from their cage we headed back for lunch, which was great! It was nice to talk to the other parents when we all didn’t have to watch the kids play t-ball. 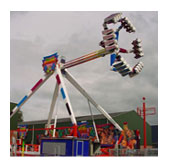 Once lunch was done everyone headed out to ride the rides. Jayme grabbed us and away we went. We did all the rides even most of the little kid rides. The one that scared the HECK out of Anthony was the Screaming Eagle. For some reason Joshua felt this was an appropriate ride for Jayme. And Jayme had NO issue with this great plan. Once again Anthony held the bags but as he watched his son and Husband 100 feet in the air spinning to their deaths… he was forced to walk into the video game arcade to avoid  his very very rational fears.

Once we had done most of the rides we headed into the roller skating rink. Roller skating at Oaks park is something Joshua and Jayme have been doing for a while together. Each Saturday is Daddy Joshua day and the two of them head out and give Anthony a day off and get some one on one bonding time together. So the two of them were pros on their skates. Anthony… well his last time of skates was sometime in 1995. It took awhile but Anthony finally got his skating legs back, with only one fall on his butt!

The three of us must have been a sight as the T-Ball coaches 3 daughters took pity on us and kinda adopted us and hung out with us. It was very funny watching Jayme get his 7 year old flirt on with each of the girls.

We spend most of the afternoon skating. Everything was going great until they played YMCA. Right in the middle of C, Anthony fell down. Now to save face… Anthony decided to land ON his face, instead of his rear, because that would be embarrassing. When he got back up on his skates he had a HUGE egg sized swelling on the side of his face. He skated in and was mobbed by employees with ice packs and worried faces. He was in no pain, but he was done for the day.

After 20mins the swelling was gone but a nice black eye was starting to pop up. So we said our goodbyes and headed home.

Apart from Anthony failing on his face it was a wonderful day. The Dad’s still hate T-Ball but will aways love and cherish the memories all three of us had made this season.