By tradition (meaning we have done it 2 times or more), we should have been flying down to Phoenix for a family Thanksgiving. But this year the Grandparents decided not to hold the annual Turkey/BBQ feed and instead hold a big family Christmas event in Salt Lake City. So we had to fend for ourselves. Enter a new family tradition; Thanksgiving alone, but alone as a family. 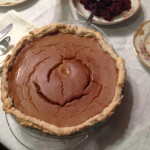 Anthony and Jayme started the cooking adventure Wednesday night with the cooking of the pumpkin pie. Early on, Anthony decided to let this be Jayme’s adventure with minimal adult intervention. Jayme always wants to help cook and mix things, so we took this chance to let him be in charge and take some ownership of the Thanksgiving dinner. With the exception of working the oven and helping with a few measurements, Jayme made the pie all by himself.

After the pie was in the oven, it was time to Brine our Turkey. Jayme and Anthony got down all the spices and salt. Jayme was thrilled that once again, he got to mix everything together. But the highlight was touching the dead cold turkey with his own hands and best of all he got to hold the turkey heart.

Once the morbid fascination with dead things was over, we dunked our bird into it’s bath for a overnight soak, we then all ran upstairs for our own nighttime showers and then bed.

Turkey Day morning arrived and Anthony was up first as usual. He started by cleaning up the dining room table and pulling down his Grandmother’s Thanksgiving china.

Jayme came bouncing down the stairs and began singing a Happy Thanksgiving Day song that he had just created. Then after a breakfast of pumpkin pancakes and some morning cartoons, Jayme was ready to cook.

Like the pumpkin pie, Anthony let Jayme be in-charge of the cranberry sauce (apart from operating the stove). Jayme used the orange juicer to squeeze out the orange juice, and used the zester on the orange peel. He measured out the sugar and then mixed everything together. After Anthony got the stove set up, Jayme stood on his little red stool and stirred the cranberry sauce until completion. Jayme was very proud of his creation.

Once Joshua was awake, he was politely shoved out the door to go get some more food. Last minute it Jayme and Anthony decided to add Disney’s Brown Derby Cobb salad to the dinner menu, we love that Cobb salad and since it was our dinner we decided to spoil ourselves. So out the door Josh must go!

We had a simple menu for dinner to prepare for:

We had invited Joshua’s boss and longtime friend, John, to come and have dinner with us. But when we learned that he was still sick and not coming, we decided to kill the ham from our menu and save it for Sunday dinner.

The one dish we all prepared together was the fresh whipped cream for the pumpkin pie. Joshua decided to enter the kitchen and try to teach Jayme how to make whipped cream on Anthony’s new mixer. Ever watch the movie the Color Purple? Remember the scene when Mister decides to cook breakfast for Shug? Yeah…. enough said. Luckily Anthony was quick enough to make them use the plastic mix guard or it would have been a real fun mess.

The fun continued when Josh and Jayme offered to peel the potatoes. They decided to peel directly into the sink, with the plan to use the food disposal to grind up the peels. It was a great plan until the sink got clogged and Anthony had to go get the plunger. But with effort and great determination, Joshua was able to get the clog removed from the drain and the Great Thanksgiving Sink Crisis of 2012 was adverted. We have never had any positive experinaces with our kitchen sink. A few months ago, Joshua broke the handle on the faucet and it was a 6 hour DYI nightmare to replace it. Perhaps it’s more fair to say, Joshua has never had any positive experinaces with our kitchen sink.

At 3:30pm the bird was done, golden brown and delicious looking. We all took a break from cleaning and cooking and everyone headed off to watched TV for an hour or two. Jayme’s new TV show is the 1950’s show Dennis the Menace. There is something about that show that Jayme really relates too. We think it is because the kid is always getting in trouble but never means to. Jayme has found he has a lot of similarities with Dennis. As he watches the show he will jump up and yell smiling for ear to ear, “That is just like me!”. The funny thing is we see it too!

Jayme enjoys a lot of 50’s and 60’s tv shows. The dialog is very straight forward, the plots simpler and the actors verbalize and over describe what is happening. It’s all very helpful for Jayme to process what is going on and enjoy it.

After our break, Jayme ran upstairs and decided to layout his special Thanksgiving clothing. He chose a bright orange long sleeve t-shirt, the brown linen pants Grandma sent him and a white short sleeve oxford dress shirt. Jayme loves to dress up for special events and it was so cute to see him put so much effort into his wardrobe, without even being asked. This was a far cry from Thanksgiving a last year when we had to force Uncle Sam into a dress shirt for dinner.

With everyone dressed up and the table set, we served out the food. Even though Jayme made most of the food, his picky eating skills took over. He had two bites of his turkey leg, a few bites of his cranberry sauce, one bite of his salad, and a few bites of everything else. But he had no problems eating 3 hawaiian rolls, 4 large glasses of sparkling apple cider and a large slice of his pumpkin pie. Since it was Thanksgiving the Dad’s didn’t worry to much about it and just enjoyed our dinner together as a family.

After dinner Anthony and Jayme made up a care basket from the leftovers and pushed Joshua out of the house again to drop it off to John who was sick and could not make it to dinner. While Joshua was on his mission of mercy, Anthony and Jayme sat down on the couch and watched the Charlie Brown Thanksgiving specials on Blu ray.

We ended the evening with a wonderful little surprise from Jayme. He asked for a bedtime story and when we tucked him in; Jayme read the story to us. We worked so hard over the summer break to get his reading up and now he is really doing it. It just made our day!

We have so much to be thankful for this year, but the biggest thing we are the most thankful for is Jayme in our lives.

PS. Photos are up on Shutterfly for those who wish to see them.,