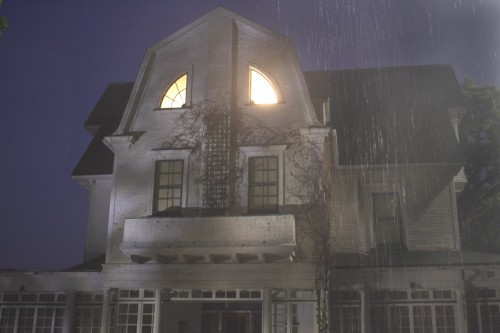 We signed on our new home on Wednesday February 27th. The signing was in Beaverton and took about 40 minutes of writing our names over and over again. An adult version of lines… punishment for some unknown infraction.

Thursday evening we met our realtor at our new home and she handed over the keys. It was a painful event, as both Joshua and I were sick as dogs. Both of us had called into work sick and we spent the whole day in bed asleep. So no celebration over our house just body aches, fever, congestion, tummy &  plumbing issues (trying not to be gross). This was the first sign that we had purchased a CURSED house.

The first weekend with our new cursed home we pushed past our sickness and did too much. We started in Jayme’s room. Four coats of magnetic paint and 2 pints of TARDIS blue and Jayme now as a place to stick up all of his artwork. We also repainted all of his trim, door, ceiling and walls. Added new a new light switch new plug sockets covers and door hardware. Jayme’s room has become test room for our color scheme for the whole house…. and we LOVE IT.

Joshua fixed the dining room light switch, it made scary crackling sounds (another sign of the curse?). It now is a very cool dimmer with light level programing. Yeah… he geeked it. He also got a temporary fix for our garage opener and rekeyed all the exterior door locks.

Knowing that Jayme is too little to really help with the heavy lifting on move day, we decided that doing Jayme’s room first and filling it with his toys would give him a place to go that us not under foot. So we have moved his computer to the new house and most of his toys. But that doesn’t mean Jayme is not helping or wanting to help. Anthony had Jayme help remove all the base trim from his bedroom, Anthony gave him a special hammer to use, the hammer that Anthony’s Grandfather gave to him when he was a bit younger then Jayme. Yes… the hammer is being handed down again and Jayme is THRILLED to have his own hammer. Yes, Anthony cried.

We had been concerned about Jayme signing off on the house. We have been looking for a year and he has only been excited when we would look at a home with a swimming pool. Any other time and he would state that he did not want to move. Who could blame him, this kido has been moved around from foster home to foster home. So we have been doing a lot of work to make him feel apart of the process, so he has the feeling of control. And all the way up to the signing he flat out told us that he did not want to move.  So we have had out fingers crossed for the past week. We didn’t know if all our extra work with Jayme would pay off. That is until we drove down the hill from our house to our rental one evening. Anthony said “ok let’s get in the car and head home” Jayme climbed into his booster seat and said “Dad, this is our home, we just rent the other place.”.