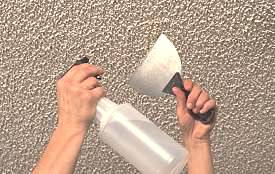 With a week to go before moving day and Jayme’s room completed we wanted to do one other room. We choose the laundry room now known as the cursed room.

We first took down the florescent work light fixture and started to remove the popcorn celling. This proved to be a HUGE job. We bought a portable water sprayer and put down 2 layers of plastic sheeting on the floors. Jayme and Joshua sprayed and Anthony scraped, and scraped and scraped.

At the end Anthony was covered head to toe in wet white goop. It was a hard call what looked worse the floor or Anthony. But thanks to the double layer of plastic sheeting the floor cleaned up very easily. So I guess Anthony looked the worse!  The whole process took 2 hours if you count prep and clean up.

Step two was to add a ceiling fan. This involved making a whole bunch of holes. Our first hole was around the old light fixture. We wanted to look up and see if we could just add a light/fan combo unit. But we found out that the ceiling joists ran the wrong way. So we had no way to run the venting to an outside wall. With the laundry room backing up to the garage we thought we might be able to vent into the garage and the out to an outside wall. Again this proved undoable.

Third hole we cut a large corner piece of the ceiling out hoping it would land under a little secret utility room we found between the master bathroom and the garage. But it too did not appear to be achievable. A bit heartbroken and tired Jayme and Joshua headed out to find lunch as we had spent the whole morning trying to find a spot for the ceiling vent.

While the boys found lunch Anthony keep drilling holes. First one landed just on the inside of the Master bedroom but only 6 inches from the wall and the secret utility room behind it. It was a true EUREKA moment. The last pilot hole landed in the secret room!

The solution for the venting had us cut a 6 inch hole in the floor of that secret room and running insulated ducting from the fan location through the floor, into the secret room then out into the garage attic space then finally to an outside wall.

Next was a trip to Home Depot, were they now know us by our first names. We picked up the wall paint, wall patches, joint compound, a ceiling fan, double wall light switch, 15 feet of wire, 25 feet of insulated venting, a 4 inch hole bit, new switches and a new wall switch plate.

We had to cut two final holes in the popcorn free celling to allow us access to run the wires and expand the light switch box. Running the wire proved to be the easy part. Rewiring 2 switches for 3 hours was beyond us. Now in fairness two ourselves we ran into 2 messed up issues. First, the switch was wired in series and once we finished adding our new line the downstairs bathroom wall plug stopped working and second the old box was very narrow. Took us 3 trips to Home Depot before we found the right type of box to install that would work. Luckily we had our main fuse box scheduled to be replaced the next day and Joshua was able to ask them to figure out why the second plug stopped working. Turns out it had nothing to do with our perfect wiring job. A tripped GFCI outlet on the 2nd floor was the issue. Itwould have taken us years to figure that out!

Once we had installed the fan and Anthony nearly cut off his finger and gave the required blood offering to the demons living in our cursed laundry room, we wired up the fan and switched it on. We bought a super quiet version since the cat box was destined for this room and we normally have it running 24-7. We turned it on and the first thing we noticed was it sounded loud. Looking at it we noticed that the fan drum looks lopsided. So the curse strikes again, clearly more blood was needed to appease the spirts. At some point we have to take it apart and see if we can re-center it. The troubleshooting shooting book has the how to… but we just have not had the time to fix it yet.

Anthony spent 2 days patching the ceiling and sanding it smooth. But as we got to the night before the move we just didn’t have the strength or will power to stay up all night painting. So we decided that we could just push the washer and drying into the middle of the room and at some point paint around them.

After the movers left we plugged in the washer and you guessed it, it didn’t work. A $275.00 house call later we had a working washer. Jayme and Anthony painted the room changing it from a ugly peach to refreshing light blue called “refresh”.

The last item will be the new blinds for the room, we have them but we are feeling a little blood weak, so we dare not risk it now.