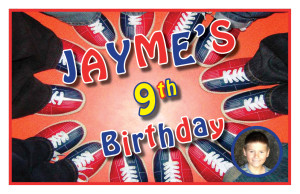 The Dad’s woke Jayme up with birthday music. The night before Daddy Anthony had pick up a car full of balloons and a huge Happy birthday banner. When Jayme came down for breakfast he found that we had the breakfast table covered with presents and fully decorated for a birthday breakfast. Anthony made homemade blackberry pancakes with homemade blackberry syrup. Jayme was SO excited and gobbled up his breakfast and started his big birthday weekend.

At 12:30pm at school Joshua arrived with cupcakes and apple juice for Jayme’s whole class. Jayme was thrilled!

For his birthday dinner this year Jayme said he wanted to stay at home and have a house party. But he wanted to eat and he said California Pizza Kitchen. So Joshua ran over an got Jayme’s favorite pizza the BBQ Chicken pizza with pineapple on top. We all sat around our dining room table and had our take out feast.

Jayme decided to open most of his gifts this year on this birthday, but he pick out the two largest to open at his birthday party with this school mates the next day. He got a Perplexus, two Lord of the Rings Lego sets, Risk the board game and more Pokemon stuff.

At 8:00pm we got in the car and drove down the hill to Clackamas Town Center and bought our tickets for the 8:15pm Digital 3-D showing of LEGO the movie. We stopped off in the concession area and got Jayme a big Coke slurpy and a large popcorn. He LOVED the movie and had an amazing evening. All the way home (and for the rest of the weekend) he sang the Lego theme song over and over and over again.

Joshua loaded his car with the remaining birthday presents and party favors. Then he made for the bowling alley. Anthony and Jayme headed to Baskin Robins in Anthony’s car to pick up the ice cream birthday cake!

Once everyone arrived at the bowling alley we set up our stuff and waited for our guests to arrive. Although we had invited half of Jayme’s classroom only one of his classmates had RSVPed. So we didn’t know what the turn out was going to be like. We where prepared for as many as 14 kido’s but prepped Jayme for the worst.

In the end only the one classmate made it. At first we were worried Jayme would see this as a huge negative thing and it would ruin the party for him, but both Dad’s kept their happy faces on and kept saying how much fun we could have now with a smaller party, because that meant more bowling time for every one.

The one kido who did show up was great and Jayme and him bowled for 2 hours. They both had a blast and in the end that is all that matters. We also had a large group of Jayme’s grown up supporters and friends who showed up. So the party didn’t feel empty at all, in fact we all want to go bowling again soon!

Best part of the part came right at the end, as the prepaid lanes switched off Daddy Anthony still had 2 pins standing and handed the ball over to Jayme for the official last bowl of the day. Jayme rolled and pick up the spare, it was simply amazing and a great way to end the party.