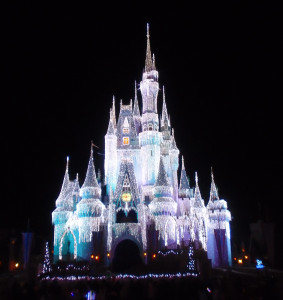 As the tempature dropped and the sun faded, we drove down I-4 towards the Disney World resort area from Universal Studios. To save some money on our trip we decided to drop down a level to a Value resort but upgraded the dining plan to Deluxe. In the past we have only stayed in the moderate resorts so we really didn’t know what to expect. We picked Disney’s All Star Movies. To cut to the end, we were not really impressed. It felt like a large Motel 6, which is not a bad thing, but we kinda were expecting it to have more of the Disney level of service and quality. 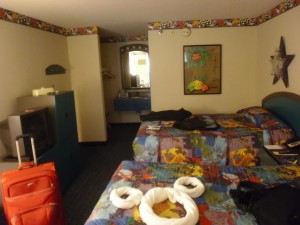 Our semi-sour impression started at check in. We did the online check in, which promised to make check in quick and easy, it wasn’t. Seems they had just started a 3 day computer switch over and no one seemed to know how to do anything. Because of the computer change over we got stuck with 2 double beds, which meant we slept apart for 5 nights as the doubles are more like large twins. Not the arrangement one wants when you on vacation looking for  1 on 1 time….

The room as clean but very worn. Unpainted wall patches, rusty patches on the bathroom tile and the rooms furniture was very dated worn and on dresser drawer was broken. But we were at Disney and the room didn’t really matter that much, or at least that was what we kept telling ourselves. By the end of our vacation we knew one thing very clearly, we would never stay at anything under a Disney moderate hotel again, this hotel was not for us. Every time we where by the Magic Kingdom the conversation was “Which of these Deluxe hotels shall we stay at next time?” Not, should we, but which one…. It was kinda funny. Oh, by the way, Polynesian was the answer.

After inspecting our “room” and unpacking a little. We got back in the car and drove up to the Magic Kingdom. We learned after our first trip that having a car is a huge plus. The Disney bus system is great, but there is nothing like being able to just get in the car and go and not rely on a crowded bus. When your tired or wet, the bus never comes or goes fast enough.

We parked at the transportation center parking lot and opted for the ferry boat crossing to get to the Magic Kingdom. Bay Lake was cold but smooth and glassy.

The park was all decked out for Christmas. Sadly a lot of the flowers and trees where wrapped up to help save them from the frost, but all the other decorations were up and glowing in twinkle lights. We got into the park a little after 4pm, got our wristbands and started to explore. 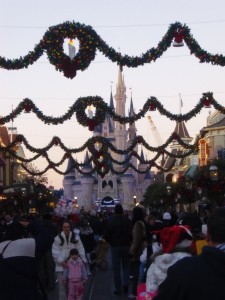 The Mickey’s Very Merry Christmas Party is a hard ticket event. Which means they close the park to only those guests who buy the party tickets. For us it means less crowds! We love Mickey’s not so Scary Halloween party. So we were really looking forward to the Christmas party. The party began at 7:00pm, so we had 3 hours to kill.

Since we are Disney nut jobs and had JUST visited Disneyland in LA a short 6 months ago, we found ourselves lost for things to do. So we headed over to the People mover, which is not in Disneyland anymore and it became our first ride of the night.

It took us a bit to get into the swing of things mostly do to the cold, but by the time we got to the Haunted Mansion the Party had begun. One of the highlights of the party are the free hot cocco and cookie snack stations dotted around the park. Which we took advantage of all night long with the temperature dropping to 28 degrees!

The Christmas fireworks were very nice. The accompanying music was a mix of secular and religious music and done very tastefully. The Fireworks themselves were impressive!

The party run until 12:00am, but at about 10:30ish we were cold tired and worried about our 7:00am wake-up call for EPOCT. So we called it an early night and headed back for the car.

CHECK OUT OUR PHOTOS!