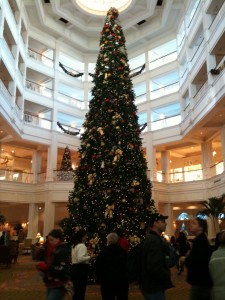 We woke the next day to frigid temperatures. The overnight low was 29, a bit of which we felt up close and personal at Mickey’s Very Merry
Christmas party. So we had to really motivate ourselves to get up and get back into the weather. Today marked the first day WITHOUT
having to wear long johns. The high was suppose to get up to 60’s, so we felt a bit confident. We had breakfast reservations at the
Grand Floridian Cafe, inside the Grand Floridian Resort at 9:00am. So after showering and dressing we jumped in our little Kia rental and drove over to the Grand Floridian.

The Grand Floridian is known for it’s life-size holiday Gingerbread house that they hand make each holiday season. So after we checked in at the Cafe and

got our buzzer we spent a few minutes exploring the gingerbread house and the rest of the amazing resort decorations. The Grand
Floridian’s holiday decorations made our own hotel’s christmas swag look like they had just hung a bunch of cheap junk from the dollar
tree and called it good. The resort and decorations were amazing.

Once we got to the restaurant, it was shocking to see how many people got turned away for not having
dinning reservations, yet we got right thanks to Anthony.

We like simple breakfast places that do traditional american breakfasts well. We love places like Biscuits here in Portland. Every trip to Disneyworld we find ourselfs looking for a Biscuits type place on Disney property. Turns out the Grand Floridian Cafe is not. It was a nice breakfast but a bit high brow and poshy weird. Example, Joshua ordered the Steak and Eggs special. It came out looking all arty, the steak was a bit too charred but the frittata, (ohh the frittata) which was served as an after thought filler was super yummy. 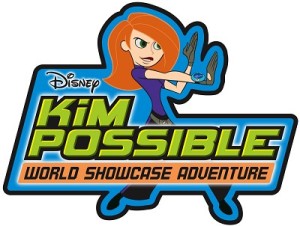 After our Posh breakfast we drove down to EPCOT. EPCOT is hands down our favorite park, we love world showcase. This visit we tried to get in all the
new things they had added since our last visit. First up was Kim Possible World Showcase adventures. You sign up and get a converted flip cell phone. A
little cartoon game then sends you to one of the countries in World Showcase on a secret mission to help Kim Possible catch the bad
guy. It is really well done. The game is interactive with objects and place in the park. Like window displays will change to fit the story line,
flags will raise ect, all activated from your phone/communicator. It was really cute although not really aimed at our age bracket,
but still fun. We did 2 of the 7 adventures, England and Norway. We saw a lot of parents working with their kids to solve the puzzles. We also saw a few kids fighting over who go to hold the Kim Possible Communicator aka cell phone, it was pretty funny.

The other neat new event going on was the Santa’s around the world. Each country would have a storyteller come out and tell about the Christmas Traditions of their country. Morocco was interesting since they don’t do Christmas and China had a very expressive storytelling telling the Monkey King story. That evening we had Candle Light Processional Dinner reservations at the Nine Dragons restaurant in China.

How to discribe Candle Light Processional…. Well here is what Disney says:

Candlelight Processional is a special holiday event held nightly at the American Gardens Theatre in Epcot theme park as part
of Holidays Around The World. The event retells the stirring story of Christmas with a special celebrity narrator accompanied by a
50-piece orchestra and a mass choir.

Before we flew down we signed up for the dinner package, which gives us guaranteed seating for the show. But do to our last minute trip planning all they had left was headed over for dinner Nine Dragons restaurant. So think of it as The Christmas Story Christmas dinner, just with out the smiling duck. Well that was our spin on it. Dinner was ok, Nine Dragons is a very very tamed down American Chinese food restaurant. Not bad, but not really good. The meal was a bit forgettable so we will talk about dessert. Anthony likes rice pudding, Joshua LOVE LOVES it. So when we saw rice pudding on the menu we both jumped for it. What they brought to the table was black. Rather two bowels of black food substance, with sugared wonton chips on the side. Seems the chef wanted something different for desert. So he made the rice pudding with black rice kernels still in their uneatable hulls. Taste? Bland. Texture? Well imagine rice pudding with quarter inch long strands of straw in it. It was a textural disaster. Straw wallpaper paste.

After “dinner” we walked up towards the Candlelight theater area. The first show was just wrapping up so we figured we should get inline for the next. The line turns out wrapped all the way down to Japan, many of the people in line with us didn’t think we would make it in. As we waited passersby’s would ask what the huge line was for. The best response we came up with “Oh this line? This is the fastpass line for Soarin’ ”

Even at the back of the line we got great center row seating for the show. The special guest narrator was Steven Curtis Chapman (never heard of him, but apparently he is famous or something), he read the story of the birth of Jesus Christ straight from the Bible, Luke’s version. What we and about 25% of the crowd had expected was going to be a nice mix of traditional holiday favorites with some Disney Characters and movie tie-ins (Like every other Christmasy thing in the park). Turned out to be a very religious event. It was like going to church or mass, which is ok but NOT what we were expecting at all in a theme park. It was funny to look around and see other peoples faces and reactions to a religious event in a theme park. It reminded us a bit of the Blackadder Christmas special…….

Blackadder:
Shall I begin the Christmas story?

The Prince Regent :
Absolutely, as long as it’s not that terribly depressing one about the chap who gets born on Christmas Day, shoots his mouth off about everything under the sun, and then comes a cropper with a couple of rum coves on top of a hill in Johnny Arab land. Edmund

The Prince Regent:
Yes, that’s the fellow!
Keep him out of it. He always spoils the X-mas atmos!

The music was great. There was the main professional Disney Choir and then flanking them on each side were local high school choirs. It was pretty moving. One funny thing was as all the high school girls sang out with all their might and the high school boys… well they moved their lips. So you had this very powerful and loud female sound to the evening. It reminded Anthony of his Choir in High School, all the jocks pretending to sing, because singing was gay. As the temperature dropped down to 31 our resolve to stay for the whole event started wane. We also started to regret the lack of thermal underwear. In fact the theater started to clear out as it got colder and colder. We started to feel very sorry for the orchestra who had to play in the cold. We did make it to the end, many did not. Now we sure a few of you will call us Philistines or worse. But when the choir got to the last song, the hallelujah chorus, the couple in front of us stood up. Which completely blocked our view of the stage. At first we though “Hey, would you mind sitting down or moving down the row and out, we still want to see the show?” But then a few more stood and then some more. At this point it was clear half of the audience was unsure why the other half just stood up. There was some real confusion, which totally took our attention away from the performance. It took about a full minute for everyone to cave in and stand up as well. We like dorks just sat there, not sure what the heck was going on and we were sure we did not want to stand like sheep in the cold.

Seems many years ago on March 23, 174, The musical score “The Messiah” was performed for King George the II. Now at the end durring the final Hallelujah Chorus, for some reason the King stood up. Some say it was his gout bothering him, some say the though it was the start of the National Anthem being played so he stood so people could see and praise him better, some say he was moved by the music. But regardless of the why, royal protocol dictates that when the monarch stands, everyone in the monarch’s presence is also required to stand. Thus, the entire audience and orchestra stood when the king stood during the performance, some say initiating the tradition in English speaking countries. The post event irony of this is our contemporary audience all stood directly in front of the US revolutionary war themed American Experience pavilion, you know the one celebrating our nation’s break from the King of England…. not sure if our founding fathers would have approved. After the show we headed out of the park, skipping the fireworks. The cold finally won.