Saturday Morning of our Trip, we woke up with the plan to climb Diamond Head Crater. But no one other then Anthony wanted to get up that early. So we decided to spend the day at the resort rather then try and rush to the top of the crater and then rush back to check out of the hotel.

After our horrible lunch on property the day before we decided to go local rather then tourist. About 3 blocks away was a locals diner called “The Coffee House”. Everything was right out of the 1960’s, from tables to decor. Menu’s were tattered and stained, tables a bit wobbly and sticky. FOOD was great, service personal and attentive. The only issue we had was Anthony’s order was hashbrowns was very over cooked. When the bill came, so did an apology from our server and she had removed it from the check, without us even asking. We loved the Coffee House.

After breakfast we wandered back to the room and packed up our bags, checked out and checked our bags into bag check. Our shuttle was arriving later at 12:00 to take us to our next “hotel”, the Pride of America cruise ship.

We had some time to kill so we walked up into the main drag area of Waikki and then back down into the little village area of our hotel. We got Starbucks and picked up some Izzi sodas. It didn’t take long before Joshua started to get sick, we don’t know if it was the heat, the Izzi sodas or the milk/soy from his coffee, but Joshua started burping like Charlie Bucket on two bottles of fizzing lifting drinks.

It was about this time that we got a call from our shuttle service that he would be late again, so this gave Joshua time to run to the restroom and try and clear out his passage ways (no nice way to say that really).

When our shuttle arrived we all loaded up and in. Within a few minutes, we were at the port and we got into the boarding line. On our last NCL cruise we were met at the curb by porters who took our bags away, well in Honolulu you have to cue up in a long line to place your bags on the scanner beltway. It was a bit annoying, but the line moved fast enough for us.

As we got to the actual cue lines to check in Hawaiian natives in traditional “tourist” garb greeted the crowds. Jayme was given a palm woven headband, which he wanted, but did not want to wear. So as we worked our way though the line it bounced between the dad’s heads.

Before we had departed, Anthony had to get Jayme’s caseworker to sign off on a bunch of forms for NCL that NCL’s website stated we just had to have to board with a minor. Of course, they never asked for any ID or paperwork for Jayme. But other then that waste of time, Check in easy.

Right before we boarded the ship we stopped at the kids club sign in desk and got some information on what Jayme would get to do in the kids club.

Once on board we had to walk over to the customer service desk and pick up a child size life vest. We then started our own self guided tour of the ship. First stop was to the kids club to sign Jayme up and let him see what it was all about. We explained Jayme’s special needs and none of the staff seemed to have any concerns. 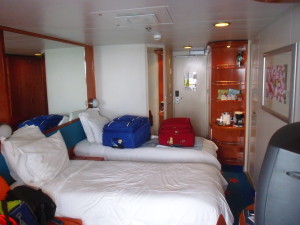 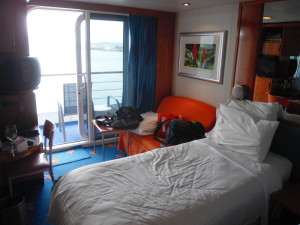 After kids club we decided to explore a bit more, but before we got to far then they announced that the rooms were open and ready, so we headed down to our room. Anthony had booked us a portside balcony room. Jayme loved the room and really liked the fact we would all be sleeping together in the same room (something that was hard for him to switch back to when we got home) At first Jayme didn’t really understand that his bed would be pulled out of the sofa every night. We didn’t really understand his level of concern until later that night.

After some quick unpacking, hungry we headed to the Aloha Buffet for some grub. We all had a nice lunch. We did a lot of our meals at the Aloha Buffet as it was easy to feed Jayme. We also started eating a lot of fresh fruit. The golden pineapple was good, but watermelon seemed to be on our plates for each meal.

With hunger vanquished, we started to explore the ship deck by deck. Jayme had questions about everything, from the smoke stacks to how the ship ran. The one questions he asked over and over was ‘When will we start moving?”.

After a day on deck and in the ship exploring and walking, we headed down for dinner at Skyline restaurant. We had a nice dinner as the ship pulled out of the harbor and headed out to open sea. On our last cruise we ran right into a Hurricane, so as we pulled out and the waters got a bit bumpy we started to get concerned that we would be on another “fun” cruise. We talked a bit to our server and he did warn us that Hawaiian waters are bumpy, but the worst night would be on our return sale to Honolulu. So with that to look forward to, we headed back to our stateroom.

As we opened the door Jayme became amazed. Before we left we flipped the turndown marker on our door, so as he entered he found the beds turned down and more importantly he got to see his bed made up. He was THRILLED and started jumping up and down and yelling thank you, thank you, thank you! It was a nice way to end the day. 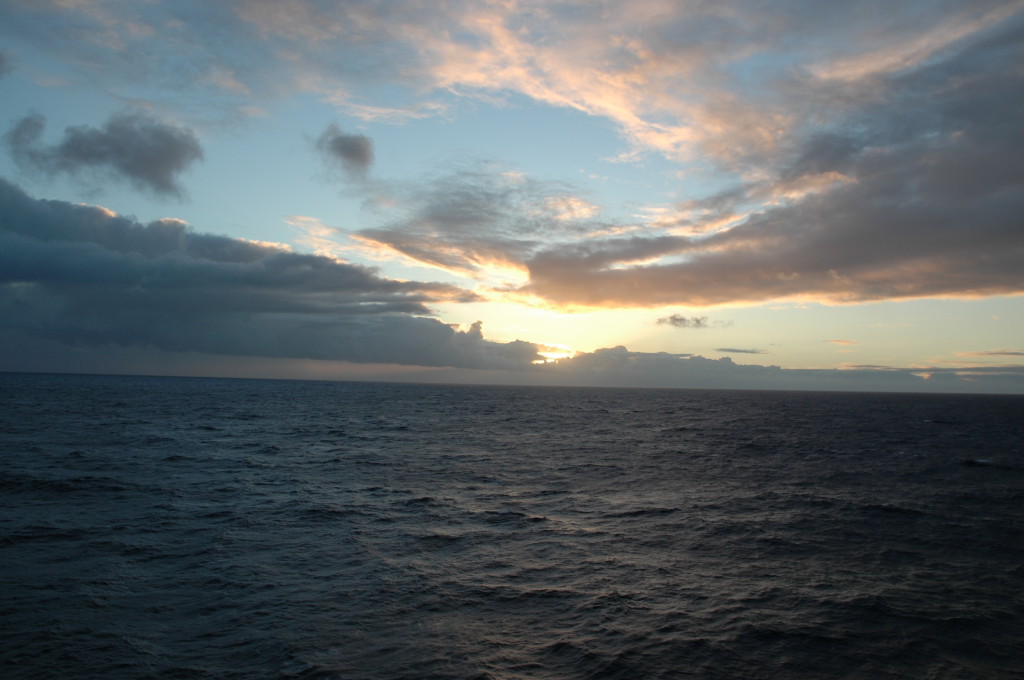