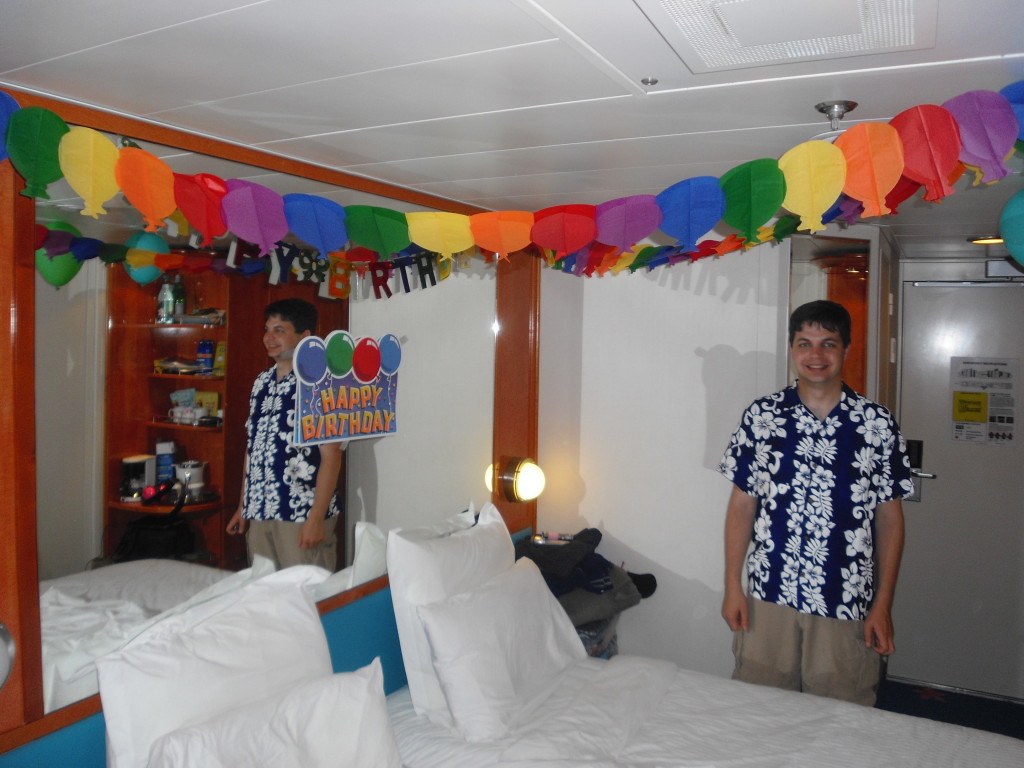 We woke at sunrise and from our balcony we were able to watch the ship slowly drift into our first port, Kahului on the island of Maui.

After each of us showered and dressed. Jayme gave his birthday card to his Dad, IT was a super cute moment. We then headed down for breakfast in the Skyline resturant. On our last cruise we loved eating in “fancy” restaurant for breakfast. This time on the Pride of America, it was not quite as cool, but we still enjoyed it. For Jayme, it was a bit much, he really is use to his food being ready and waiting when he gets to the table.. At least for breakfast. He is still working on the whole order the food, wait for the food and the eat the food.. AKA delayed gratification. We finished our breakfast as the ship came in to port and docked. So once we finished eating we only had to take a slight detour up to our stateroom and then walk off the ship. Once in our stateroom we emptied Jayme’s small suitcase and filled it with all of the dirty laundry and then walked off the ship. At the end of the dock we climbed right on the Thrifty car rental shuttle and within a few minutes we were at the airport car rental location. Renting cars while on the cruise was a lot faster and much more enjoyable (with the exception of Hilo, more on that later). We were given an Dodge Caliber and within 10 mins were driving to our first location, the laundromat. Using our iPad we found several laundromats near the airport, we picked the Kahului Laundromat. We asked the nice lady if they provided full service, which they did. So we handed over Jayme’s suitcase. The review online for the laundromat was less then accurate, everyone was great and it was fairly cheap as well. After dropping off our dirty clothes we turned the car towards the Maui ocean center aka an aquarium. We found the aquarium with no issues and it was a nice drive to the other side of the island. The admission price was steep. Over $70.00 for the 3 of us, not the costliest leg of our vacation, but it was pricy for what they really offered. The aquarium property size looked huge from the outside, but most of the buildings turned out to be part of the dockside mall area and not part of the aquarium itself. The Oregon aquarium, on the coast, by comparison is much larger and cheaper. But what they did have was nice, also it was not very crowded so we had the chance to have some interactions with some staff members who described and talked a bit more about the exhibits as we walked around. 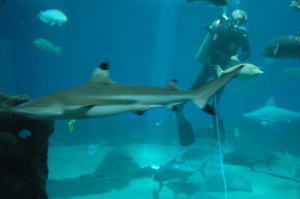 Jayme loved the sharks, from the moment we entered that was what he was looking for. We saw some white reef sharks and black reef sharks. Joshua, kinda was camera crazy, within 10 minutes he leaned over to Anthony and said in a concerned voice “I already have taken 250 photos, I only have room for about 300 more…”. We hung around to see the green turtles be fed, but watching turtles eat romaine lettuce is kinda a non-event. Still, Jayme enjoyed the interaction with the other kids and even tried to answer one of the questions the keeper asked. But by the time we made it to the deep sea exhibits, Jayme was started to nod off and wanting to be carried. We sat down and watched the predators get fed and Jayme fell asleep in Anthony’s lap. Anthony carried Jayme out and we headed back to the ship for a bite to eat in the Aloha buffet and a nice nap. After filling up on grub and energy we walked off the ship again, jumped in the car and headed over to laundromat. We stowed our freshly laundered clothing in the trunk and head out to go shopping. We drove from Kahului back to the other side of Maui, past the Ocean center and up Highway 30 to Lahaina. We had dinner reservations at the Old Lahaina luau. But first we wanted to hit some of the Lahaina oceanfront shops and stop by Hilo Hatties. Hilo Hatties sells nothing but expenisive tourist junk, and we had a list of people we wanted to shop for. We also wanted to pick up some cheap Hawaiian shirts to wear to the luau, but this proved problematic.

We got to Hilo Hatties, and quickly realized that mostly everything carried a UBER tourist tax markup. Hawaiian shirts started at $80.00. So we picked up only a few little things for workmates and then walked down to the oceanfront stores. After killing some time and spending too much money on some t-shirts for Jayme (Del Sol.. They change color in the sun), we headed back to the car. But before we gave up and drove to dinner, we stopped by a Hawaiian outlet store. This proved to be a good stop, we picked up a Aloha shirt for each of us. Once we got to the car we changed and headed down to the luau. Over a year ago Anthony ordered 3 tickets. One for Josh, one for himself and one child ticket…. just in case. He also paid extra to be at the traditional seating, low tables and pillows for seats. As we approched the luau area, cute hawaian boys in native wear directed traffic. The main lot was full so we have to park over a bit in the overflow parking area. As we got to the check in area, we gave our name and were handed our tickets and two commemorative menus. They directed us over to a long entry line and told us not to worry as all seating was pre-assigned. This didn’t seem to sink in with most of the other guests who cut in line or held spaces for HUGE groups who cut in front of us. But for once, in the many, many times this has happened to us, WE got the last laugh. Because he who books first laughs the last laugh… or something like that. Did we mention Anthony booked over a year in advance? Once we got to the front of the line, we were given fresh flower leis and offered water or a mixed drink (Mai Tai). We then were handed off to our waiter who marched us past everyone and then all the way down to the very front table, dead center and only a few feet from the front of the stage and told us the first 3 seats (nearest the stage) were ours. Because he who books first laughs the last laugh. HA We ordered some free drinks and plopped our flower leis down at our table and started to explore the area. The luau was right on the beach. They had several native demonstrations going on. Tiki carving, grass weaving, and some of the drums that would be used for the music later. Jayme was able to play with a few of the Hawaiian rattles and bang on a few of the small drums. 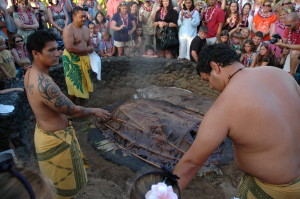 When we were shown to our seats our waiter told us to make sure to get over to the imu (sand roasting pit) early. So we headed over and got a prime spot for the undigging of the pig. It is kinda a non-event watching guys undig a hole, but Jayme liked it. And once the pig was out, it was dinner time. We headed back to our seats and soon were escorted over to the buffet line. We decided that Jayme was going to try everything. So he got a taste of everything they had to offer. Octopus, raw salmon lomi, raw ahi lomi, and squid, crab salad, pork,taro salad and of course, poi. He loved everything but the poi & taro salad. The show was really good. With our front row seats, it felt like we were on stage half of the time. Jayme bounced his legs and shook his little butt during each of the dances, drummed his hands, and BIG smiles for the whole show. The show had a lot of very cute Hawaiian boys, oh and there were some girls too… if your into that sort of thing. It showcased the history of the hula and how it has changed as Hawaii and it’s people have changed. A very good show.

The show started right before sunset and it was dark as we left the luau. On our way back to the ship we did get another show. Six cop cars, all with lights flashing  lined the road as we drove back. The quote that immediately ran through our heads “the Gods are angry from all of this celebrating”. We got back to the ship around 10:30pm, Jayme was asleep in the back seat. All of the free parking spots by the ship were gone, so we drove a bit further down and parked in a questionable dirt lot. We didn’t worry about it too much as we were only heading into the ship take a nap….