Our alarm and wake up call both hit within seconds of each other at 3:00am. We quickly put on the clothing we had laid out; Heavy socks, undershirts, jean pants, sweater pullovers, gloves, scarfs and hats. Tonight we would climb a volcano and meet the sun.

We dragged ourselves off the ship and back to our car. We poured Jayme into the backseat and he was back out before we even left the parking lot. We got on the Hana Highway and then turned on the Haleakala Highway for our surreal 2 hour ascent into sky.

Haleakala (“house of the sun”) is a volcano that rises to 10,023 feet, that is 23 feet above the point in which is “now safe to turn on your personal electronic devices”. The drive to the top was in pitch darkness, no street lights. Just switchback after switchback, and the eerie thought that right off the edge of the road was a UBER scary plummet, thankfully obscured by the pitch black night. We could see the lights of  other cars out in front and above us as they snaked up the switchbacks. 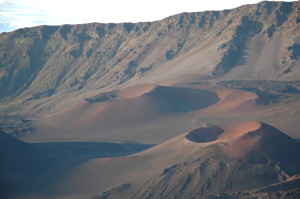 We got to the top with about 45 minutes until sunrise. It was cold, VERY cold. The tempature change was a pretty big shock to us after a week of 80 degree weather. Now it all made sense why Anthony forced everyone to bring their heavy winter coats to Hawaii.

We walked over to a nice spot, found a rock and waited for the sun. Even the view in the predawn light was amazing. We could see the milky way (Anthony’s first time) and some of the planets (Venus, Mercury and Jupiter)quite clearly. Jupiter itself was huge and quite bright. Over the next 45 mins the whole sky transformed, so many colors and hues. Slowly, you could see down into the crater. Then slowly you could see more and more details. Then a tiny pin dot of yellow appeared on the horizon. That dot then grew into a huge ball of fire and light that bathed the whole world in light. Behind us a Hawaiian native began chanting a Hawaiian prayer. It was an amazing sunrise.

Once the sun was up, we looked behind us and a HUGE V shaped shadow spread out behind the Haleakala, this was of course the shadow of the volcano. Very very cool.

We drove down slowly, stopping to see different cinder cones. The weird thing was it took about 15 mins before we even hit the cloud layer (4000 ft.) It was also a bit scary to see how close we had been driving to the edge on the way up and how far the drop down really was..

We had only one stop on the way back to the ship, an emergency bathroom stop for Jayme. We made the stop at the gift shop that serves breakfast and were able to get in right as they were opening. We made it back to the ship and all three of us fell right back into bed.