We all woke up around 9:00am and we all woke up hungry. We dressed and showered then headed up to the Aloha Buffet for breakfast. Becuase we slept in we missed the regular buffet, but the sun deck version was still open so we sat outside and had a simple breakfast.

After such a full day the the day before, we really felt we had done it all. So we took our time getting off the ship and really had no destination in mind. We flipped through the Hawaiian cruise guide book Anthony had and decided to drive up to Iao Valley State Park.

The Iao needle is a big rock, it was also a very nice little park. We walked around and played by the river. Took photos by the rock and then stopped by another little park on the way back. All of us were a bit tired and cranky. None of us wanted to really do anything strenuous.

The little park we found was very nice. It had lots of little streams and rivers with little fishes. Jayme had fun running round the hidden paths and exploring the ponds. It made for a nice morning. 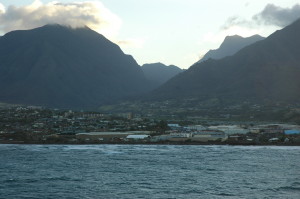 We decided to head back to the ship early. But we stopped off to pick up some bottled waters and snacks. So nice being on a cruise where we can take the food and drink on and off. We found a drugstore and ended up with a big bag full of stuff. We headed back towards the airport, stopped to fill the car and then before we knew it we were on a free shuttle headed back to our ship.

Once on board we headed down to the Cadillac Cafe, a 50’s themed diner. We ordered some milkshakes, which were very good. They came as an extra charge to our meal, but today had been a cheap day so we splurged. The food was…. well gross.

We all were a bit grouchy so we ended back up in our room for a nice LONG nap. We had really been pushing ourselves while on Maui, so we deserved a nice rest. After our nap we hung round the room on the balcony, the ship had not left yet so we spent some time being lazy.

Tonight we also decided to live a bit and had dinner at the onboard Little Italy italian restaurant. Joshua ordered the drinks.. He got himself a amerretto sour and ordered Anthony wine. Now this just shows you how tired Joshua must have been, because nothing else explains why you would order someone who HATES wine, wine. As she brought the drinks to the table, Joshua’s eyes grew big and he looked right at Anthony and said “You hate me now, don’t you?”