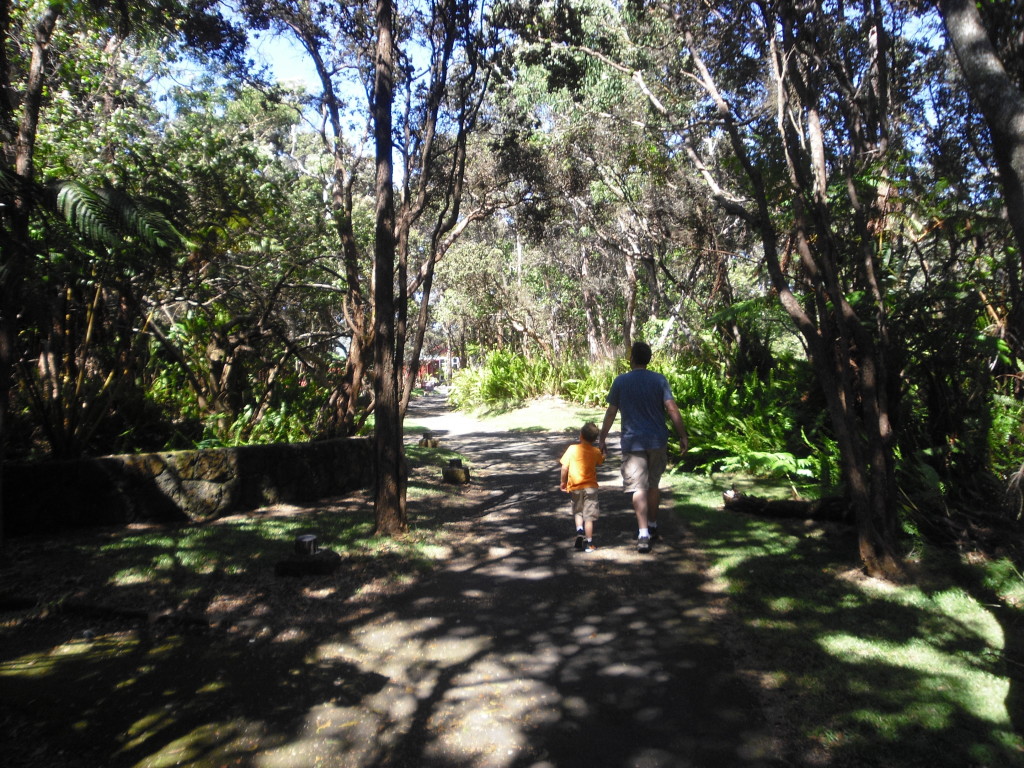 Anthony woke first as usual and climbed over Jayme to hide out on the balcony until the others woke up. One of the cool things on our trip was the iPad had celluar connetions for 97% of our trip, even as we moved between the island. AT&T might suck in Portland, but they seem to have Hawaii covered. So Anthony spend a lot of his mornings waiting for us to wake up, out on the balcony checking us in to all of our destinations via facebook.

Once we all had woken up and showered and dressed we headed down to the Skyline restaurant for breakfast again. We were able to watch the ship dock from our table, it was nice.

Deporting was easy, but the shuttle to the Thrifty car rental sight was NOT. The shuttle arrived and first they announce only the designated drivers could board. So Joshua and Jayme had to wander off and find a place to wait. Once on the shuttle, Anthony got booted off because his name as not on the rental list. So very angry and not wanting to wait, we hailed a cab and drove off to the airport. Once at the airport $20.00 poorer, we get to the Thrifty car line proudly displayed on a the wall was a Special welcome to all our blue chip members, A DeSoren. So they had Anthony’s name for the special check in but not to get on the shuttle (incompetent boobs).

So we get our rental car, another Dodge Caliber, and headed off for the Hawai‘i Volcanoes National Park. We shadowed a big tour bus the whole drive up, amazing how many people choice to take the very pricy tour rather then do the car rental…. perhaps they know how incompetent Thrifty Rent a car in Hilo is, hummmm.

Our first stop once we got to the park was the visitor center. We stopped in, a got a free map and found out what was open and what was closed. We then decided to take a short walk to the caldera rim. There was a nice, paved, easy, flat, smooth, wheelchair accessible, path to the edge. It was on this nice path that Jayme forgot to how to walk. At the time we were baffled by why he could not walk, but looking back in hindsight our guess was he had his sea legs and his little body was still overcompensating for the motion of the boat. If you have ever been on a bumpy cruise you will know what we mean. Regardless of the reason.. Jayme fell down. The first fall was just some scuffed knees, no blood. 10 feet later the second fall brought on a small cut on the palm of his hand and his left knee scrapped and bleeding. The third fall got the other knee.

In hysterical tears and screams we made it back to the visitor centers bathroom, washed out his cuts and scrapes and applied every band aid we had in our emergency kit. Jayme was fine, but acted like he had been given a mortal wound. This play acting came and went all day long depending on how bored or tired he was. Regardless, for the rest of the day he had one of us holding him by the hand. We averted about 15 falls by the end of the day by holding his hand.

Our next stop was the Jaggar Museum, it is higher on the caldera rim and has a nice view of the smoking lava. Inside the museum Jayme got to see different types of lava and even jump up and down and create his own earthquake. We jumped back into the car and decided to head down to the Thurston lava tube. Along the way we stopped off and did a short walk out to some active lava steam vents. It was kinda stinky, but pretty cool. Jayme had a lot of questions about were the steam was coming from.

We followed the Chain of Craters road down to the lava tube. Once parked we had a short uphill then downhill climb before we came to the tube entrance. The first half of the lava tube has been wired with lights, but thats it. The floor is uneven and water drips down from the ceiling, it was neat but not to thrilling. At the midpoint a set of cement stairs rise up back to the jungle and the path back to the car. But we were a bit more brave and prepared. Anthony handed out the flashlights that he and Jayme had purchased several weeks earlier and we detoured the staircase and stepped down in to the darkness. 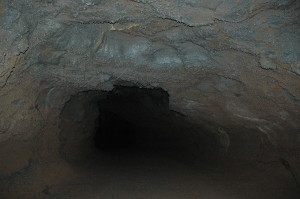 Once under our own light, the tunnels where much more entertaining. We took small steps and inspected the tunnel carefully, noting the different colors of rock and letting our imaginations run wild. We walked pretty far back and came to a drop off in the floor, the tunnel continued further, but we would have had to lower Jayme down so we decided to turn back. As we did we realized we had a tag along, it was a bit disturbing. Someone who did not bring a flashlight had followed our light down the tunnel and had quietly followed us. Once up out of the darkness we found a restroom for Jayme and then continued down the Chain of craters road.

Our next stop was at the 1974 lava flow. We climbed out of the car and had our first chance to walk across an lava field. Jayme was REALLY excited to be able to get out and touch the lava rock. We really wished we could have shown him flowing lava, but at the time of our visit there was no flowing lava. 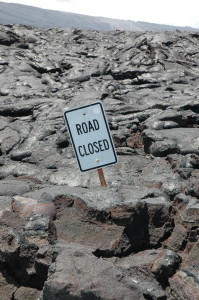 We kept driving down and made it all the way to the end of the road, well the road kept going but is kinda burried under a lava flow. We took a long walk to and climbed on the lava river flow that covered the road. Just was we turned back and started the long walk back to the car, we felt little drops of waters. We made a beeline back to the via the Holei Sea Arch and we started the long drive back up.

Unlike our last port, we only had the one day in Hilo with no overnight. So we had to start the drive back to the airport. Once back on the main road and the sky opened up and the rain started to pour down. Thankful to be dry we started to look for someplace to eat, all of us were hungry.

Not wanting to be adventurous with Jayme, who was not milking his boo boos for all they were worth, we ended up in an IHOP. Breakfast is good anytime of the day and Jayme adores pancakes.

After helping the Hilo IHOP economy (yeah it was not cheap). We tanked up the car and headed back to the airport to drop off the car. We found the drop off area, unloaded the car and took the keys and paperwork up to the desk.

“Is your flight today sir?”“No, we are on the Pride of America” “OH… Well, didn’t you get the drop off instructions from the shuttle driver?” “NO! He refused to let us board, didn’t have my name on his list, But I see my name is still on the welcome board right next to you. WE had to PAY for a Cab!” “OH….. well you have to drop the rental car off at a super obscure location….” (FRUSTRATION!!!)

So back in the car….. drove around for another 10 minutes looking for a hidden parking lot. Once we arrived we joined everyone else under a big white tent and waited for the shuttle. Again we got to see the wonderful humanity of our fellow passengers. As the shuttle pulled in everyone shoved their way pass us in a effort to prevent us for cutting in line. Only point was, we didn’t even try to cut. It was so funny to see the everyone think the worst of us.

Well, the first shuttle was full so we had to wait for the next one. So we waited alone under the big white tent. As we waited more people arrived and positoned themselfs so they could get on before us, you know because they where there second and all. So as the next shuttle arrived we found ourselfs behind a bunch of cutters. The driver pulled up with an almost full shuttle and called out “I can only take 3”, so of course the other passengers who came after us stepped aside and allowed us to board, since we had been waiting longer…. wait NO they didn’t. They shoved forward and tried to cut us off. Well, the lot attendant saw what was happening so she called out and said “DeSoren party you have been waiting the longest… please board. The cutters made a path and we stepped forward.

As we walked pass the car lot attendance we called out and pointed to a nice old couple who arrived just after us (now both buried behind the mob) and had been chatting with us and Jayme, “THEY, are next in line”, then we glared at the cutters, all mean like.