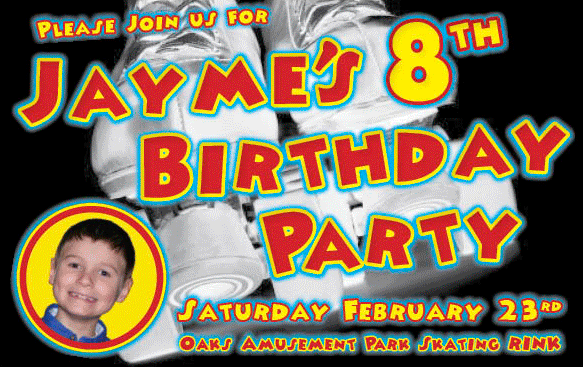 This year with our plans to start the adoption process over again and buy a new home, We decided not take Jayme to Disney World for his birthday again.  We would only take him down in the fall for Food and Wine and Mickey’s not so scary Halloween party. We are such cruel parents.

Jayme’s wanted another big birthday party and the Dad’s were more than happy to fulfill the request. But just like last year Jayme’s birthday landed on a weekday. In our world this means two (2) birthday events that had to be planned. We had a long talk with him and let him know that we could have a special family only dinner on his birthday and on party day we would go all out. Jayme was fine with the plan; he even knew where he wanted to eat on his birthday… the Cheesecake factory. He kept calling it the cake place, but we knew what he meant.

The night before his birthday we pulled out his life journal and looked at all of the photos of when he was younger. It was a nice way to sum up and take a pause on his life’s journey. He got to do a little reflection and so did the Dad’s. But it was so hard to tuck our 7 year old into bed that night, knowing that the next day he would be 8, and our 7 year old would be gone forever.

The next morning we woke Jayme up with the Birthday song and his favorite breakfast (German pancakes with lots of lemon juice). The night before Anthony and Jayme had haircuts, so after breakfast we got to put up Jayme’s new hair style a mini little faux hawk. Super cute we sent our 8 year old off to school.

It was kind of a well-managed military style maneuver getting all three of us to the Cheesecake Factory for dinner that evening. Anthony driving in from Camas, Joshua had to make a cross town trek from Lloyd center to Milwaukee then across town again to Washington town center.

Jayme had only one real request for dinner, he wanted dessert first. So when our waitress came around we all ordered dessert first. Jayme ordered a huge slice of triple chocolate cake. Joshua ordered a yummy coffee cheesecake and Anthony had the strawberry cheesecake. As we waited for our first course of desserts to arrive the table next to us was surrounded by waiters and they all sang the happy birthday song to someone. It was a little bit after that Jayme started to worry that he would not get the same treatment. About 10 mins later our desserts arrived and with it a small army of waiters who also sang happy birthday to Jayme, he was thrilled!

We decided to skip getting main course meals and instead opted for a small feast of appetizers. Jayme can be a picky eater, but he had ate a little bite of everything we ordered. By the end of the meal we all were very full and Jayme was getting tired and so were we. So we got what was left boxed up and we headed for home.

Home, we let Jayme open one of this birthday presents (we had a small pile for him to pick from). He picked the biggest of course which turned out to be a Disney fireworks maker, you point it at the ceiling and it makes firework images with fun firework sounds. We of course loaded up the real Disney fireworks music for him and he was making Disney magic before bed.

The big party day arrived. We had a 3:00pm table reservation so we headed out early to the rink. Arriving at 2:00pm we checked in and Joshua and Jayme got their skates and hit the rink. Anthony stood watch by the door keeping an eye out for any of our party guests.

We had confirmations from 7 adults and 2 kids, but at 2:55pm no one had arrived yet. While Jayme skated we started to come up with some back up plan of how we would save the party with just the three of us. It was then a small boy and a Mom arrived at the front door holding one of our birthday invitations. Then a few moments later another Mom and child and then before we could even point to the table everyone showed.

In total we had 4 kids (two from Jayme’s class), our family friend two Grand kids (whom we traveled to Disneyland with), two of Jayme’s teachers and many family friends. In fact the pile of presents was a bit overwhelming.

We got all the kids down at the table. Each kid had a bag of cotton candy, a balloon hat, ice cream and soda. Then came Jayme’s cake and all the kids sang to him… it was too cute. After the feast Jayme opened his mountain of presents. Anthony then handed out all of the goodie bags he made for them. Like last year we tried to put some good stuff in them. Some colorful rubber bouncy balls, a metal ring puzzle, 2 wacky pencils, a coloring book, a packet of seeds to plant and a bottle of bubbles.

We then all hit the rink. Jayme headed right back out and it took a bit of reminding to hang out with his guests. But once we connected with them he didn’t stray too far from the group.

The weird upside to the party was being able to connect with the other parents and the kids from Jayme’s class. One of the kidos who came is a classmate of Jayme’s who… well lets say Jayme has some very strong feelings about. It was so nice that at the party they both were able to have some real positive interactions with each other outside of the school setting. Fingers cross that on Monday that keeps going.

But talking with the two mom’s was great, both of us are looking forward to running into them at future school events and birthday parties.

The party ended in the video arcade, with the two moms, Joshua and Anthony all feeding the kids quarters. Everyone had a great time! It was a great 8th birthday celebration!