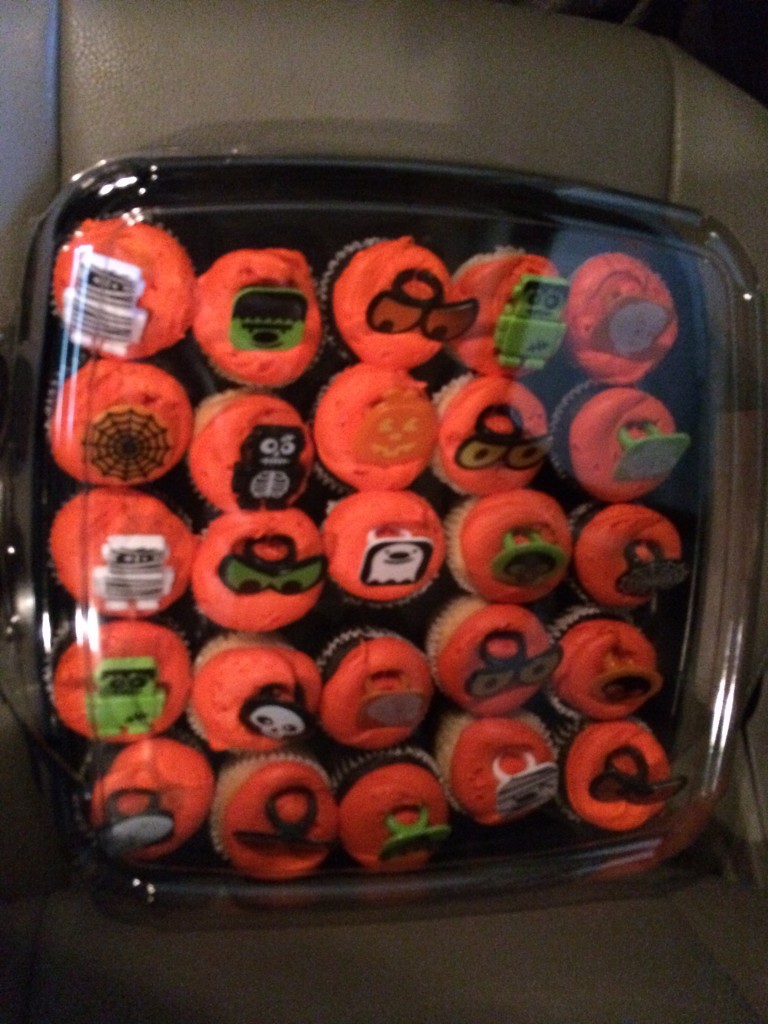 The day before Halloween and a long 4 day break from school for Jayme and his classmates, Anthony arranged with Jayme’s teacher to bring in cupcakes.

Now having brought in cupcakes for the holidays at Jayme’s school before, we are well aware that the school does not celebrate Halloween, Christmas or any other fun kid holiday from our own childhoods. So when asked why we wanted to host a cupcake party… the official answer was “Because it’s Orange Frosting Day of course!”

Anthony took the whole day off from work, so as Joshua headed to work, Jayme and Anthony headed out to a surprise breakfast together at Biscuits!

Ever since Anthony started his new job a year ago, Joshua has been pulling morning duty alone with Jayme. Each morning Anthony either leaves before Jayme wakes or right as, which leaves only a rushed moment together and a heart broken father. So going to breakfast was a real treat for the two of them, but perhaps more for Anthony.

Anthony had his normal, the Country Benedict, and Jayme ordered the french toast with strawberries. It was so nice to have time to spend together and not have to worry about getting to work on time! As a real special treat they ordered a huge cinnamon roll to share.

After breakfast Anthony dropped Jayme at school and then headed over to Freddie’s to pick up the Orange cupcakes and BOY were they Orange!

Jayme was so happy to see Anthony, he ran right over to him, shocked and desperate to know why he was there. Orange Frosting Day of course! The non-holiday officially established in Jayme’s mind, the two of them setup a little table area for all the kids to come and help celebrate Orange Frosting Day with them.

Jayme has a huge class with a lot of ethnic variety and what looked to be kids all at different development levels, and still something new for Jayme, girls in his class. All of the kids had great manners and were very excited about Orange Frosting Day

One of the things the dads have been worried about is the persecution Jayme might face coming from a home with 2 dads. The chief reason we all have the same last name is to stem any issues that might have come up with three last names and two men. But so far Jayme has not mentioned anything to us and our interactions with the schools has been nothing up supportive and equal. But every once and a while we get some questions.

One inquisitive little boy did come right up to Anthony and asked, ” Is it was true that Jayme has two dads?”. Then Anthony said “Yes, how many do you have?” The little boy thought for a moment and then said “Two, one step and one normal one”. The kid then smiled and took his cupcake. All of his questions had been answered. If only all grownup LGBT conversations were that simple.

After all the kids had their treats, Jayme presented his teacher with a chocolate dipped apple that was all decorated with gummy worms and spiders.

When everyone was done, we helped clean up the classroom and then Jayme decided that the leftover cupcakes needed to be given to his other teachers. So Jayme grabbed the tray and headed out to the bus area to continue the cupcake hand out. We also had one more dipped apple for Jayme’s favorite school therapist and we needed to find her as well.

All of the other teachers asked. “Is it your birthday Jayme?”, “No… it’s Orange Frosting Day!” he would say.

Will all of our cupcakes handed out we headed to the car. On the way home Jayme pipes up in a little voice “You know dad, today is just like when you use to take care of me after school, before I had to go to day care.”