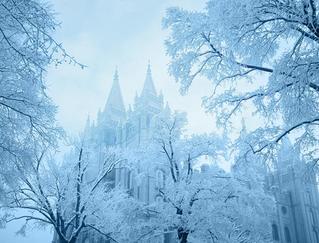 So after our family Christmas, it was time to fly off to the winter wonderland of Salt Lake City.

We all woke early, Anthony had to head out to work and Joshua and Jayme had to finish their last minute packing.

Joshua and Jayme drove to the MAX parking lot and transferred to the MAX. It took about 50 minutes to get to the airport but Jayme loves riding the MAX. Jayme did wonder why the green line didn’t just continue to the airport. After picking up some snacks and COFFEE, we were able to board our non-stop Delta flight.

We recently counted and this was Jayme’s 8th airplane flight since he moved in with us. And as normal he did great.. a very uneventful flight. Much to Jayme’s delight it was snowing in SLC.

After we got our bags and found our rental car we headed off to meet the whole clan. Jayme was really excited to see everyone and quickly went to work making himself the center of attention. He was super excited to see Uncle Sam again and kept asking where cousin Aspen was. We had a nice family dinner at Eve’s house and it was great being with the whole family for a late Christmas.

On Thursday Jayme went out with Uncle Sam while Josh, Shiloh and Taylor caught up and played at being adults. Jayme went sledding and made snow angels.. He really loves the snow it was a lot of hard work keeping him out of it  he kept saying he wanted to go play outside in it.

Friday, we spent with Shiloh as he had the day off. Guess what we had for lunch! Jayme’s favorite,  pizza. Joshua also found out that he had been living in Oregon for way to long as driving was a real challenge. Yes he knows how to drive in the snow. But apparently getting the car over 65 mph (70) is the challenge. Speeding is just not done in Oregon.. We spent a nice quiet day with Shiloh and then picked up Taylor from work. After that we headed back to the grand parents house and spent a nice quiet evening at home..

Saturday was a blast as his cousin Aspen had come down and they were so happy to play together. You could hear them throughout the house just singing and dancing have a great time. Saturday was also the Baby shower so after we dropped the girls off the boys went bowling. Joshua plays great with the bumpers on, Jayme does not need them. Jayme was thrilled that he was spending so much time with his uncles and that Shiloh taught him how to throw the ball really fast. Of course he kept saying that this was nothing like the video game and how he is much better at that.

After bowling we headed back up to the baby shower and Aspen and Jayme played around a bit more with some of the toys. After going and renting ski equipment, for Sunday,  we headed back to the grandparents and set up for dinner and presents. Nothing like a second present opening to make the kids go wild. Jayme didn’t seem to quite grasp that this was also more for Aspen as she had spent Christmas with her Mom and now was spending it with her dad. It’s really hard to explain to Jayme why she had all of these presents and why he had so few (at least in his eyes… all of his presents filled one suitcase on the way home). He was really enthused by the model train set (paintable hobby thingy), and the legos, and the new game of operation (from Aunt Daisy).

Sunday was ski day. Jayme had never gone skiing before and this was a real treat for him. For fun Uncle Shiloh and Josh switched kids. Josh took Aspen out and did different runs while Shiloh started the process of french fries and pizza.  Jayme had a blast and by the end of the day was making it down the hill without falling. Maybe later this year we will have to take him out on the mountains in Oregon.

Monday we went and played with Aspen again at Uncle Shiloh and Taylor’s house.  After a while Grandma showed up and we went out to one of her favorite Vietnamese places for lunch. Jayme tried everything and ate really well considering how picky he can be. That night we met up with cousin Nova and Uncle Sam and went out to the movies for Monsters Inc. in glorious 3D..

On New Years day, we left Salt Lake and headed home. We had a great trip and enjoyed seeing all of our family and friends. Next year Christmas will be in Portland (hopefully).