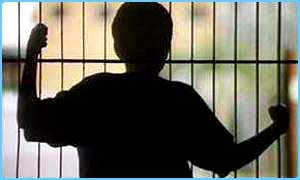 Last summer our family was very lucky, Anthony was laid off of work.

This wonderful news came just days before the end of the school year. This meant that Anthony and Jayme were able to spend the summer together and Jayme did not have to go to summer daycare. The two of them had a wonderful summer of learning and bonding.

Unfortunately, this year with both dads were gainfully employed and with no Uncle Sam or other family nearby and  free; Jayme had to head off to daycare.

For the past year Jayme has been attending after school daycare run by the local school system and doing a wonderful job. This daycare is a mainstream program with no extra supports. But the staff are well trained and really get Jayme. One of the staff members even shares Jayme and Anthony’s passion for all things Disney. The only downside, of course, is they are closed over the summer break.

So Jayme and a few other  kids from his daycare were hosted at another school run day care site. Every member of our family refers to this site as the bad daycare (and a few other non pc phrases).

Now in fairness to the daycare, they are not unsafe, nor do they beat the children, feed them grey gruel, or lock them in leg irons. But this daycare site was and is just not a good fit for Jayme. You see all summer long the daycare was maxed to capacity with kids, it was hot and staff seemed to working hard each day just to keep order and not go insane.

Also from how Jayme describes it the kids are mostly left to self manage and entertain themselves. Translated into therapy-speak that means a world with very low structure and Jayme thrives with structure. So much so that he even tries to enforce structure on other kids. Summer daycare was in fact, probability, the most unstructured environment he has known in years.

When we first told Jayme that he would be going to that daycare we had a small explosion. Jayme hates going to this daycare. In the ramp up to the first day he begged Anthony to quit his job, suggested that Uncle Sam move back in and even tried to get Joshua to work from home and take care of him. On a positive note this gave us the chance to have a lot of family talks and we did a lot of work to reassure away his fears. It was a great chance to tell him and show him that we trust him and he is a “big boy” now.

Privately, the Dads mentally justified summer day care as a necessary evil on two fronts;  First, both dads had to work. As much as we wanted not to, we had to. We also knew that Jayme needed as much exposure to “the outside world” we could get him if he was going to make it mainstream 3rd grade, which was our summer time goal.

Peer interactions proved the hardest for him, the older boys picked on him. Jayme was too big to play with the younger kids and socially unsure how to interact with his peers and older boys.

Jayme’s peer to peer communication skills and social warning system are of a much younger child. Coming from such a controlled world, first at the Morrison center and then the behavioral classroom, his skill set of how to be a “normal kid” is far away from the other 8 year-olds. The flip side of that is Jayme expects a higher level of behavior from his peers than most other children his age. If he has to follow all the rules then everyone else should as well.  For years now he has been taught everyone does…

Jayme got bullied quite a bit. Kids can be very mean. Another area he struggled with was that Jayme reacts very differently than other kids his age. He has been working and learning to make good choices but… You piss him off – he might cry, he might also overreact and tip a table on your head. Although we have made great progress on the later.

All summer long we had to keep going back to the love and logic training we had prior to the adoption to reassure ourselves that allowing him to fail safely now was so much better now then when he older and fails in a much larger way or worse, fails in 3rd grade. Another way to put it we needed him to fail and learn now with kids he would never see again then make those mistakes in mainstream 3rd grade and derail a very important step in his life.

At some point towards the end of the summer we could tell the staff was done trying to work with  or around Jayme. We started to get notes home of minor issues that should have only needed some redirection, but now had became major official notifications. The notes also came with very knowing glares and looks from the staff to the Dad’s.

Jayme would become very distraught at Daycare when they would tell him they were sending home a note or would threaten him with one. So much so we had to request that they not tell him about any notes.

But the notes kept coming… After a big blow up and meltdown because Jayme (the child with diagnosed impulse control issues) ran and got a ball that was 3 feet outside of the school bounds we got home a one day suspension. Then within two weeks of summer break’s end we received a full three day suspension. This final “punishment” was for Jayme hitting another child after the other kid spit in Jayme’s face, all because Jayme had the basketball the other kid wanted (yes, people had to hold the dads back, please show me any adult who would not defend himself after being spit on! Yet the 8 year old is suppose to, as if!

Luckily, Joshua was able to work from home for the suspension days. The hardest thing was the suspension was anything but a punishment for Jayme, he was free from daycare prison. Even working on homework all day was a million times better than being at the daycare he hated.

The Dads hated summer day care too, but Jayme learned more life survival lessons over the summer there then he could of at home with a dad. Still, it was a very hard summer for all three of us. It kinda slowed down everything, even our 2nd adoption plans as every night seemed to be an all hands on deck moment.

On the last day of daycare after we up picked Jayme and had the long wonderful Labor Day weekend ahead of us, we stopped by Toys R Us and picked up Disney Infinity as a reward for surviving day care! It’s like Disney’s version of minecraft. No better reward could be given for surviving Summer Daycare for our little hero.

The following week school started and we were so glad to be back at our good daycare, the dads hugged the staff!